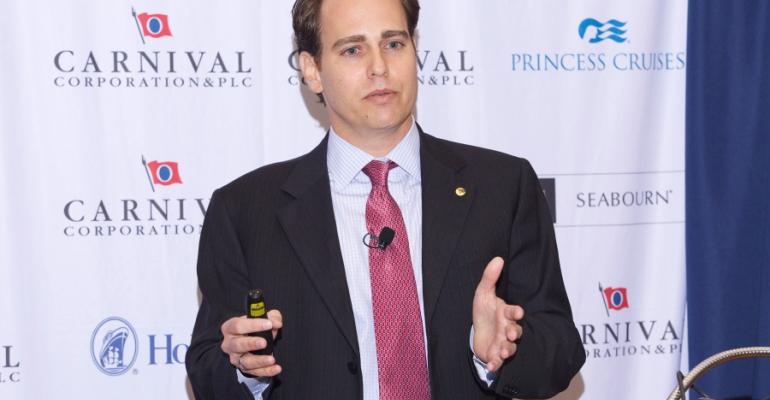 David Candib - though they're close in distance, each of the new ports is different

If Carnival Corp. & plc realizes plans to build a $70m cruise port off Haiti's north coast, that would put three of its destinations, totaling six berths, within 100 nautical miles of each other, allowing a range of diverse itineraries in a fuel-saving distance from South Florida homeports.

Besides Haiti's Tortuga Island, the other destinations are Grand Turk in the Turks and Caicos Islands and, scheduled to open in 2015, Amber Cove near Puerto Plata in the Dominican Republic. Each has two berths.

'And each is different from the other,' noted Carnival's David Candib, vp development & operations, Global Port & Destination Development Group. This gives 'something new and exciting for repeat passengers or new passengers,' along with options for itinerary planners. Plus, he said, there's flexibility for lines in case a destination is booked or there's an issue at a port on a particular day.

Moreover, a glance at the map shows if nearby Cuba should ever open to US-based cruise lines, even more content-rich, fuel-stingy cruises would be possible.

Candib will be traveling to Tortuga Island (Ile de la Tortue) with Haiti's tourism minister this month for a town hall session about the plans to develop a cruise port. This follows a memorandum of understanding Haiti's government announced with Carnival in August.

Candib is scheduled to visit the small barrier island with Haiti Tourism Minister Stephanie Villedrouin Ballmir. She has held town hall meetings throughout Haiti about various tourism projects but this will be the first at Tortuga.

Although Haiti's government is very proactive, according to Candib, there will be many challenges to create a new port. One is ensuring islanders have realistic expectations about a development that may take years to materialize.

Tortuga is currently a sparsely populated natural beauty with few economic opportunities. Many islanders commute to Port-de-Paix on the mainland for work.

There is much to do, including agreements with the Ministry of Finance and environmental impact studies and permits. Carnival plans to work with a variety of local engineers and developers.

Candib couldn't give even a ballpark estimate of when Tortuga might be able to receive cruise ships. 'It may not happen at all,' he cautioned.

Meanwhile, another new port, the $85m Amber Cove Cruise Center, a joint venture between Carnival and the Dominican Republic's Rannik family, is expected to open in 2015. It has a lush, mountainous backdrop, watersports and whale-watching opportunities and all the cultural and historic attractions of nearby Puerto Plata, a once-vibrant tourist destination that hasn't seen cruise ships since the 1980s.

Carnival's $55m Grand Turk Cruise Center, which opened in 2006, this year will reach 1m passengers, visiting on 43 ships from 15 brands sailing from a dozen homeports. The facility has a beach, a large pool, a FlowRider surf park, a Jimmy Buffet's Margaritaville restaurant and bar, and a large shopping center. It is projected to have an $81.4m economic impact in the Turks and Caicos in 2014.