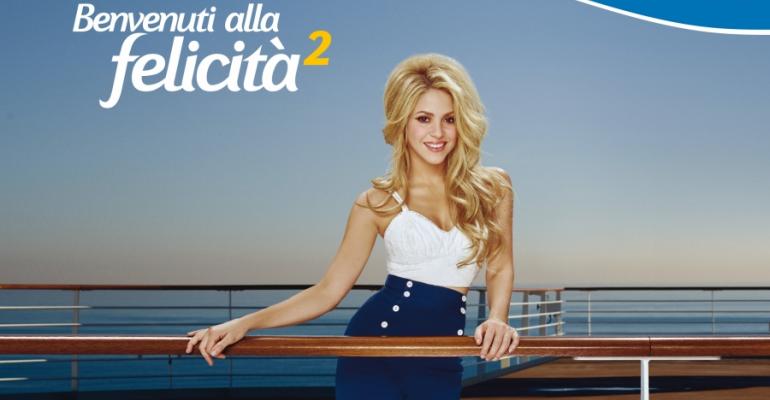 Costa Crociere is rolling out a new international advertising campaign, to be broadcast starting Dec. 20 in Italy with the slogan 'Benvenuti alla felicità al quadrato' (Welcome to happiness squared). It features a testimonial from pop star Shakira.

This and a host of other brand initiatives were unveiled Friday in Milan.

'Starting in 2016 we will propose a series of exclusive and unique experiences that can be enjoyed only on vacation with us,' Costa president Neil Palomba said.

Among these are a new gala night menu created by Michelin-starred chef Bruno Barbieri; excursions endorsed by the couple on 'Turisti per caso,' Syusy Blady and Patrizio Roversi; television hit 'The Voice' brought to Costa ships as 'The Voice of the Sea' (though sister brand Princess Cruises already has its own 'The Voice of the Ocean'), and, for children, the opportunity to meet the legendary Peppa Pig as part of Squok Club activities.

Along with Shakira, each will be a featured storyline in the new advertising, which includes television, digital and point-of-sale elements. The campaign launches Sunday with a teaser on Italian television, with the actual commercials breaking on Christmas Day. Television spots will follow in France and Spain, while in Germany, Switzerland and Austria, the ads will pop up on web channels.

Parts of the 30- and 60-second spots as well as shorter teasers were shot on board Costa Diadema. The director is Jaume de Laiguana, who worked on some of Shakira's most famous music videos. The campaign was created with Young & Rubicam in Spain, led by creative director Manu Diez, with contributions from Costa's corporate marketing department.

Concerning the product initiatives, Bruno Barbieri, who has garnered more Michelin stars (seven) than any other Italian chef, is creating a signature gala night menu that will be available on board in January.

The 'Turisti per caso' duo are working on a selection of 200 'recommended' excursions from among the more than 2,200 offered by Costa, which has a three-year agreement with the pair, according to Luca Casaura, vp corporate marketing.

Cruisers will have the chance to show off their singing talent in Costa's version of 'The Voice.' Participants will be chosen during karaoke sessions, then rehearse with shipboard musicans and singing coaches. A panel of judges will choose their favorites then passengers will decide the winner.

And, starting in April, the animated children's character Peppa Pig will come on board. A space in the Squok Club will recreate her cartoon locations, with sets that change from ship to ship. Games and educational activities will revolve around Peppa Pig under the direction of Costa youth counselors.