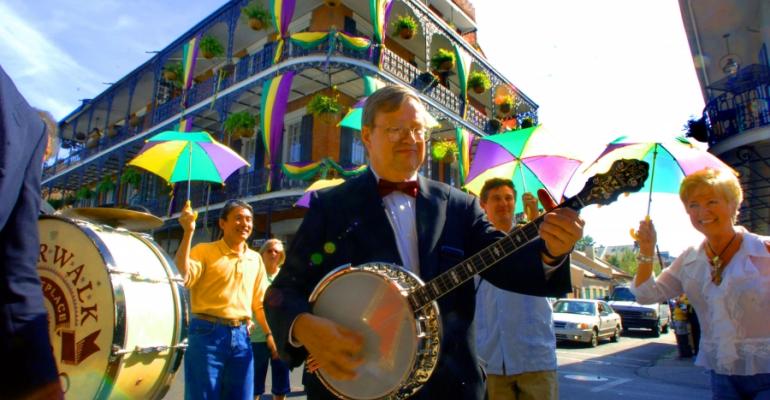 Though Royal Caribbean has no plans for a New Orleans ship after April 2015, port officials aren't giving up on the line even as they are close to nailing the longest term deal ever with a cruise operator, Carnival, forge new terms with Norwegian Cruise Line and actively court other business, including 'Project Nordic.'

Port commissioners on Thursday will consider a new five-year agreement with Carnival Cruise Lines that would start in July and include three one-year options, making this the longest potential cruise deal in history for New Orleans.

'We're real happy,' port president and ceo Gary LaGrange told Seatrade Insider. Even so, he'd like to get a third Carnival ship, if not a larger second ship.

A long-time year-round operator, Carnival carries more passengers from New Orleans than any other line and currently fields Carnival Dream and Carnival Elation. A spokeswoman said Carnival wouldn't address plans or potential growth until a deal is executed.

Seasonal operator Royal Caribbean, meanwhile, has no plans to return when Serenade of the Seas leaves in April at the completion of its agreement.

'They play a worldwide field and they've decided to develop very heavily into the Asia and Far East market,' said Robert Jumonville, the port's director for cruise. 'They're going over there on a crapshoot,' he added, speculating that this deployment may be temporary. 'They could be back in a year or two but there's no guarantee they could have a berth.'

For its part, Royal Caribbean is 'constantly reviewing deployment opportunities and Serenade of the Seas' departure from New Orleans was made in support of our business strategy, which drives our deployment decisions,' a company spokeswoman said, adding that while the line is expanding in Asia and Australia, Serenade's move is 'not necessarily a direct result of that expansion.'

When Royal Caribbean came in four years ago, it gave the port a two-year commitment with two one-year options. 'They completed their contract and gave us a year and a half notice they're leaving, a very gentlemanly thing to do. We have no beef with Royal Caribbean. It's business,' Jumonville said.

'We're still in talks with Royal Caribbean and we have not given up. We hope they will return in the near future,' LaGrange added. He doesn't think a 2016 return is out of the question.

That would likely be on a seasonal basis, though, since—like Norwegian Cruise Line—the brand has a limited number of ships to commit to year-round deployment. However, both brands are growing.

Norwegian's contract has expired but the line is not due back until November, with a new seasonal ship, Norwegian Dawn. The port and Norwegian are ironing out terms for a new agreement. According to Jumonville, the talks involve seasonal, year-round and larger ships.

When Royal Caribbean exits, that opens a slot at the Julia Street Terminal that New Orleans is keen to fill. 'We'd love to have Holland America Line or Princess there. We constantly call on MSC and we were calling on Disney before we realized, in the short term, with four ships, [that's probably a long-shot],' LaGrange said.

Whether Julia Street gets filled or not, the port is moving forward with a third cruise terminal, at Poland Avenue. It is hoped that construction will begin by the end of the year on the $32m first phase which entails the terminal and new parking facilities. Completion is estimated by October 2016 in what will total a $47m investment.

In addition to homeporting ships, New Orleans has been building transit calls. P&O Cruises vessels have visited from time to time, and AIDA Cruises, Crystal Cruises and Azamara Club Cruises are booked for multiple stops.

Plus, port officials have been in discussions about 'Project Nordic.' That could only be Viking Cruises, which has been planning to break into the US river sector with a newbuild, possibly two.

'We're real excited about it,' LaGrange said, deferring further comment to the operator.

A Viking spokesman told Seatrade Insider that beyond what has been said publicly, the company has nothing new to share related to the Mississippi at this time.

Though Royal Caribbean's exit is a blow, port officials remain confident in the appeal of New Orleans, noting cruise industry research shows passengers spend about three times more in the city than in most other destinations.

'People love to come here, eat at the restaurants, enjoy the entertainment and visit the museums. It's a convenient port, an affordable port and a popular port,' LaGrange said.