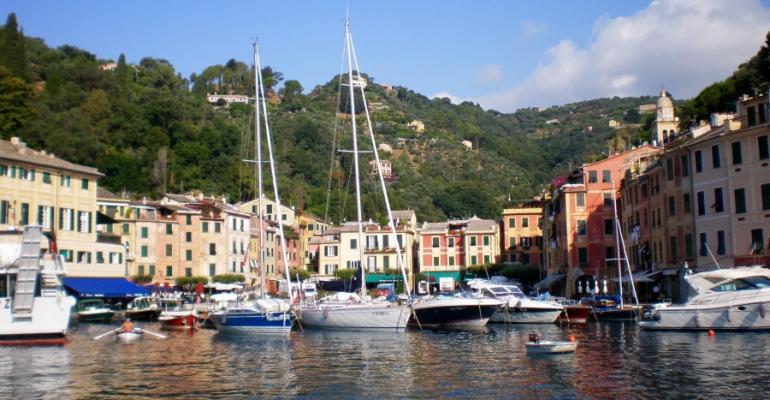 Portofino - new anchorage should reduce tendering time and improve safety (Photo: Anne Kalosh)
A new anchorage closer to Portofino's protected marine area is hoped to renew the appeal of the picturesque Ligurian harbor for cruise operators. The location should also reduce cancellations due to weather/marine conditions while cutting tendering time and improving safety.

Italy's Coast Guard presented the new regulation, No. 138/2015, three years after the 79/2012 government decree in response to the Costa Concordia grounding. The decree increased the distance between anchorage areas and the protected marine enclaves along the coast.

The new anchorage is projected to reduce the current 25% to 30% of calls canceled annually due to marine/weather conditions while improving service and comfort for cruise passengers, according to Giancarlo Linari, general director of Portofino Marina and Tourism Services.

The regulation cuts the distance between the anchorage and Portofino's protected marine area to 0.3 nautical miles from the 0.7 established in 2012, according to Coast Guard Lt. Felice Monetti, commander of Santa Margherita Ligure’s maritime district including Portofino station.

This was decided after a lengthy monitoring of Portofino's protected marine environment and a concerted analysis with all the local parties and maritime interests, Monetti said.

The new and slightly larger anchorage on the eastern side of Portofino promontory should provide better protection from the west winds, ensuring smoother and safer tender operations between cruise ships and the town of Portofino.

In optimal marine/weather conditions, the anchorage is expected to accommodate up to three ships, as before, which will be reduced to one ship in rough conditions.

Both ships' masters and the maritime authorities will have a better situational and prediction awareness thanks to two signaling buoys equipped with an automatic identification system transmitter, radar reflectors and, on one of the buoys, a marine/weather station to track wind and wave conditions. The data will be transmitted to Santa Margherita Ligure’s station, enabling real-time monitoring and web distribution, compared to the typical six minutes' lapse for AIS data update, Monetti said.

The new anchorage will be evaluated and monitored through 2017.

The town of Portofino is covering the cost and installation of the signaling buoys.

'The new anchorage area is expected to provide a better service, renewing the cruise operators' interest in our destination,' Portofino Mayor Giorgio D’Alia said. The town hopes to put everything in place by October, in time for the last calls of the season.

The new anchorage could have positive implications for other protected maritime enclaves visited by cruise ships, such as those in Sardinia and Sicily.