New Princess ship to be based in Shanghai year-round 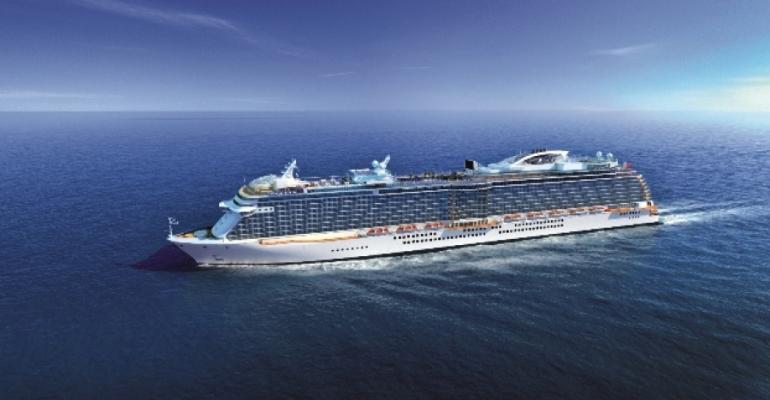 Princess newbuild - to be customized for Chinese cruisers

The new ship under construction for Princess Cruises will be based year-round in Shanghai, Carnival Corp. & plc announced late Tuesday. The 143,000gt vessel, to be introduced in summer 2017, will be customized for Chinese travelers.

The Princess deployment ups the ante in China, where rival Royal Caribbean International has dedicated two new Quantum-class ships to the market.

UBS Investment called the news further evidence that 2015 is 'the tipping point for China to become a game-changing force for the cruise lines.'

The unnamed 3,600-berth ship is being built by Fincantieri, based on the design of Regal Princess and Royal Princess, but will have innovations for Chinese cruisers, to be outlined later.

Like the earlier vessels, features will include a multi-deck atrium serving as the social hub of the ship, an over-the-ocean SeaWalk, the Princess Live! interactive studio, a large pastry shop, the Chef’s Table Lumiere, the pool deck fountain and music show 'Princess Watercolor Fantasy,' a large Movies Under the Stars screen and balconies on all outside staterooms.

Princess said accommodations will be configured for families and multigenerational travelers.

The vessel will operate varied itineraries, to be announced.

Princess ships began homeporting in China just last year, with a successful inaugural season of Shanghai-based cruises aboard Sapphire Princess. This ship returns for a second China season that begins June 4 and runs through October.

The service style of the newbuild will include the 'Princess Class' experience the company introduced during its 2014 China homeport season.