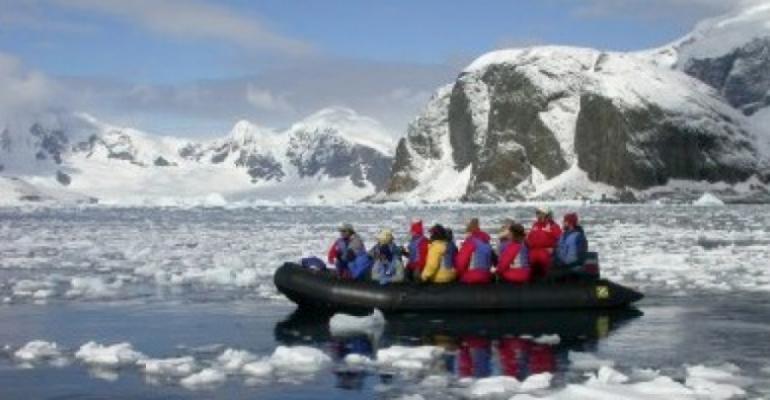 As the overall number of visitors landed in Antarctica has increased over the last two decades, tourism activity is highly concentrated at a few specific locations along the peninsula’s southwestern coast, a new study found.

In the 2012/13 season for example, more than 75% of landings occurred on an area equating to less than one-sixth of the size of London’s Heathrow Airport, about 200 hectares.

Results from the study examining 20 years of commercial cruise activity in the Antarctic Peninsula have important implications for visitor management in this sensitive region.

Published in the journal Antarctic Science, the study springs from an analysis conducted by Stony Brook University, Stony Brook, New York, in conjunction with the International Association of Antarctica Tour Operators, which has developed the most comprehensive dataset of human activity in the Antarctic as part of its mission to promote safe and environmentally responsible private sector travel to the continent.

‘There are both opportunities and challenges to having concentrated landings of passengers at relatively few sites,' said co-author Dr. Kim Crosbie, executive director of IAATO. 'While this focus on a few sites can create some challenges in terms of maintaining wilderness standards, it provides good opportunities for site-specific visitor management practices. As yet there has been little or no discernable impact at these sites, but understanding tourism patterns and trends is critical to reviewing management techniques for their continued protection.'

Antarctic tourism activity is also closely linked to economic activity in countries contributing the largest number of visitors. The study highlighted how nationalities have changed over time with China now representing 9% of all Antarctic passengers, behind countries such as the US, Australia and the UK. The growing market in Asia is expected to contribute to an increased demand to visit Antarctica in the coming years.

The International Code for Ships Operating in Polar Regions (the Polar Code), which will come into force on Jan. 1, 2017, may alter patterns of vessel traffic, the study noted. Specifically, there may be reduced traffic at the margins of the Antarctic season—early spring and late autumn—when sea ice conditions and low temperatures may preclude the use of some vessels that have not met minimum standards for polar operations.

Current restrictions within IAATO's guidelines and those of the Antarctic Treaty Consultative Meeting site guidelines mean there are fewer landing sites available to vessels carrying more than 200 passengers. The study's authors noted that if the market shifts to larger vessels, these sites will probably experience greater visitation while the sites limited to ships carrying fewer than 200 passengers, or those that require more time to execute a difficult landing, may see a commensurate decrease.

Such shifts would further increase the amount of concentrated landings in the Antarctic.