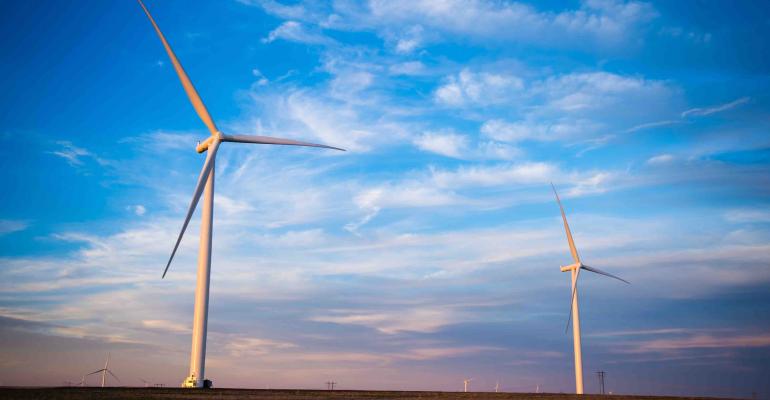 The Reading Wind Facility is expected to generate enough clean energy to offset about 512,000 tons of CO2 a year—or 10% to 12% of Royal Caribbean’s annual carbon emissions

In a novel and perhaps precedent-setting initiative that adds to Royal Caribbean Cruises Ltd.'s arsenal of efforts to reduce its greenhouse gas emissions, the cruise giant is backing a wind farm that will enable it to offset up to 12% of its ships' CO2 output.

Royal Caribbean is teaming with Southern Power on a new 200-megawatt wind facility in Kansas that will be able to provide electricity to more than 60,000 homes across two counties. The cruise operator will reduce the economic risk for building the wind farm by guaranteeing to buy its power over a 12-year period. This gives Southern Power customers the option of purchasing their electricity from a clean source.

The new Reading Wind Facility is expected to generate roughly 760,000 MW hours per year over the 12-year agreement, which translates to enough clean energy to offset about 512,000 tons of CO2 a year—or 10% to 12% of Royal Caribbean’s annual carbon emissions—starting in 2020.

The offsets apply to the greenhouse gases directly produced by the company's ships, or Scope 1 emissions.

Facilitating a new, additional clean energy source is on top of many ways RCL is working to cut its energy consumption and harmful emissions, chairman and CEO Richard Fain said.

'Reducing our carbon footprint has got to be two-pronged,' he told Seatrade Cruise News. 'To reduce energy consumption and emissions, you have to do a lot of things. There's simply no silver bullet.

'We're doing everything our employees can think of to reduce our consumption of energy. But you can't reduce to nothing,' Fain continued. These conservation efforts together with the offsets provide what he called a 'belt and suspenders' approach.

'We thought this was a great opportunity because we can help create this wind farm in Kansas, near our office [Royal Caribbean has a call center there] so we can attest that's a good place to put wind turbines,' Fain said.

This will be Southern Power’s 11th wind facility and its first to be validated as a carbon offset project under the Verified Carbon Standard. The agreement with Royal Caribbean provides Southern Power with the economic basis to construct the facility. RCL isn't fronting the money; it's assuming the risk. If power prices drop, it could lose money. Schneider Electric Energy & Sustainability Services brokered the deal.

The 200 MW project was originally developed by RES, which will lead the construction alongside Southern Power. Reading Wind is expected to consist of 62 wind turbines manufactured by Siemens Gamesa. Groundbreaking is set for second quarter 2019 with completion by Q2 2020. Southern Power will operate and maintain the facility.

Fain said the project is double the size Royal Caribbean originally hoped for. He's been interested in wind power for a long time. (He's had a wind-powered generator at his North Carolina vacation home for eight years. It's small—15 kW, he said—but it's the largest private wind turbine in North Carolina.)

About 18 months ago, Fain tasked Jennifer Love, chief security officer and SVP safety, environment and health, with the wind farm project. Her team carried out all the technical aspects, and Alfredo Suarez, VP corporate development, led the financial side.

'Because we're a big user of fuel, we're always looking at ways of becoming more energy-efficient ... Sustainability is very important,' Love said. 'Every year, we have a commitment to reduce our emissions by a certain amount. In addition to all the other things we're doing, this is something else.'

Royal Caribbean is on track to meet its voluntary goal of becoming 35% more fuel efficient on an available lower berth day basis from a 2005 baseline to 2020, a target set in 2016.

The wind farm project had to meet numerous requirements and undergo a rigorous assessment to achieve Verra's Verified Carbon Standard, the best known US third-party validation scheme, according to RCL's Nick Rose, director, environmental programs. This process took eight to 10 months. The Verified Carbon Standard ensures the emissions reductions are actually occurring so companies can be issued tradable greenhouse gas credits that can then be sold on the open market and retired as a means to offset their own emissions.

Royal Caribbean won't venture to estimate what the wind farm project will cost. 'We are guaranteeing that we'll purchase the power, and the energy will be sold back to the local grid. We can't tell the total [cost]; it depends on power prices and how they flucturate,' Rose explained.

According to Love, no costs will be passed on to passengers.

Critics of carbon offsets charge that polluters are just trying to buy their way out of reducing emissions. Rose said that isn't so for RCL.

'This is in addition to everything else Royal Caribbean does. We have tried for years to reduce our impact.' He noted every newbuild is more efficient than the last, and retrofits incorporate technology that helps older vessels. Scrubbers, steam turbines, air lubrication systems and energy management software are all examples. Royal Caribbean International's Project Icon ships will use LNG and fuel cells.

'The other bucket is to help other emitters of carbon to reduce their output. The offset is a small percentage of what we do in addition to everything else,' Rose said.

As Love put it: 'We view this as diet and exercise.'

Will other Scope I companies emulate what Royal Caribbean has done? 'We think so,' Love said, 'not only in the cruise industry but the transportation sector. We've done the hard work so now they get the benefit of the sweat and tears we've put into it—and that's good, because it's good for the environment.'