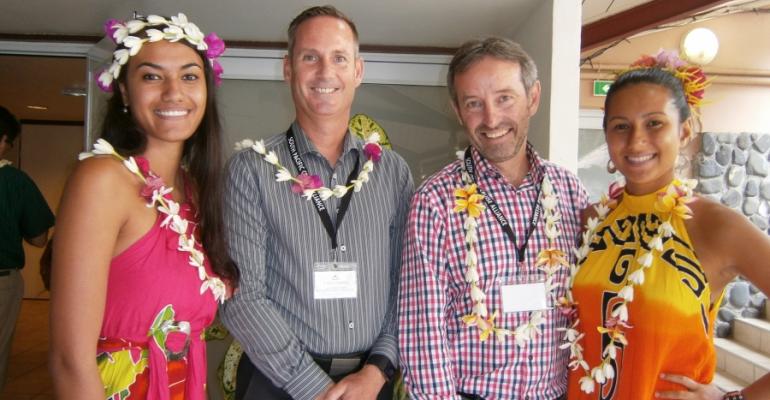 Kevin O’Sullivan, chairman of Cruise New Zealand and Rene Trepanier, executive director of Cruise the Saint Lawrence, were on hand at the South Pacific Cruise Forum to give delegates ideas on how to promote the local cruise industry.

The NZ government does not produce this information and it includes the number of ships in a wave season, the number of port calls, the number of passengers and crew, how many people are employed and puts a $ figure on what the value of the industry is to the country.

O’Sullivan said it is an important tool for members and is used to communicate the success of the industry to stakeholders.

He said CNZ is also working on Auckland’s potential as a turnaround port for the Pacific and said P&O Cruises Australia is leading the way with autumn and winter cruises to be operated by Pacific Pearl.

He said the ship will be based in Auckland from early February until June 2016 and will offer a wide range of itineraries over 18 roundtrips to ports in Fiji, New Caledonia, Tonga, the Cook Islands and Vanuatu.

‘I believe these cruises will be popular with New Zealanders wanting to escape our winters and that there is considerable scope to increase winter cruising out of Auckland,’ O’Sullivan said.

He said there is tremendous potential to expand these itineraries to include Tahiti with a secondary hub.

Trepanier said Cruise the Saint Lawrence has a photo and video bank and a first-class website, it assists with itinerary planning and travel agent training and organises familiarisations.

‘We go to trade shows, make sales calls and undertake research,’ he said.

‘It is vital to have local community support and the welcome and farewell to visiting cruise ships is most important of all.’

He said the people of Saguenay do an outstanding job in national dress, handing out blueberry pies and maple sugar taffy to passengers on the wharf.