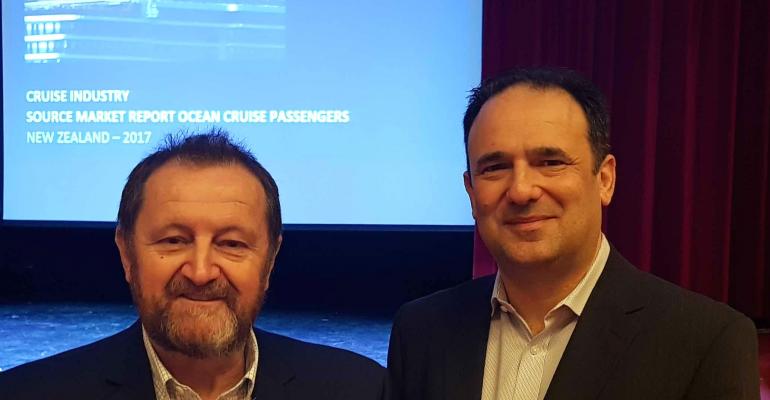 Like Australia, New Zealand suffered from infrastructure constraints in 2017. Nevertheless, it continues to rank as one of the world’s fastest growing cruise markets, with a record 98,000 New Zealanders taking an ocean cruise holiday last year.

Announcing details of New Zealand’s cruise industry ocean source market report for 2017 in Auckland Tuesday morning, CLIA Australasia & Asia md Joel Katz said that is an 8.7% increase on the previous year.
‘New Zealand continues to outperform many other more established cruise markets in percentage terms, well ahead of the USA, Europe and the UK and Ireland,’ Katz said.
‘With 109 new cruise ships set to be delivered between 2018 and 2027, New Zealand is well positioned to reap the rewards of increased local deployments, as long as infrastructure constraints can be addressed and the tax burden on cruisers and the industry does not become too onerous,’ he said.

Katz said resolving infrastructure constraints in Auckland and regional ports and minimising any additional tax burden on cruise passengers and operators is an absolute priority to future proof cruise tourism in the region.
While the industry was forecasting to reach 100,000 New Zealand  ocean passengers in 2017, three years ahead of the previous target of 2020, the slowdown in growth across the region, due to infrastructure capacity constraints, resulted in this target being missed by 2000 passengers.
The country’s growth rate slightly increased its market penetration rate to 2.2%, retaining its ranking of sixth in the world, a greater market penetration rate than established markets like Italy (1.2%), Spain (1%) and France (0.8%)
The South Pacific maintained its place as the most popular destination for Kiwi cruisers, with the region attracting one in almost three of the ocean cruise passengers.
New Zealand cruises continued to be the second most popular, with 24% of Kiwis choosing to cruise close to home.
The number of New Zealanders cruising in Australia jumped to 13,264, an increase of 112% over 2016.

The most popular cruise duration was eight to 14 days, with 44% of cruisers, but there was a massive 150% hike in shorter voyages of less than four days.
Age brackets remained consistent with 2016, with around 40% of New Zealand cruisers under the age of 50 and about 60% aged over 50.