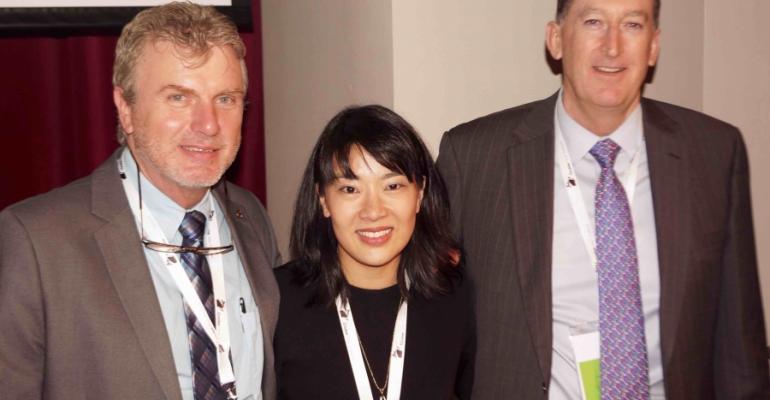 ‘This is the most beautiful country I have visited,’ Simon Douwes, director of deployment and itinerary planning for Holland America Line, told delegates at the third annual Cruise New Zealand conference in Auckland on Friday.
‘Pure gold’ is how Steven Young, director of port services and government affairs for Carnival UK, described New Zealand.
Douwes and Young, the keynote speakers, had been on a pre-conference familiarisation with Cruise New Zealand gm Raewyn Tan that was sponsored by Tourism New Zealand.
Douwes, who was making his first trip to New Zealand, said more than 50% of HAL's passengers are repeaters, highlighting the importance of finding new ports. He said port ratings are a major deployment driver and if a port rating is low it will be dropped.
The more ports on a cruise, the better it sells, according to Douwes.
Port cost control is also a major factor in itinerary planning. ‘Some ports charge way too much and we have stopped going there,’ he said.
He revealed HAL had considered pulling out of the South Pacific due to its limited infrastructure.
He said Noumea, for example, was a one cruise ship port and it was maxed out.
He said Sydney, one of the most expensive ports in the world, needs more cruise ship terminals which would benefit the entire region. The idea of using another port, like Newcastle or Brisbane, as a substitute for Sydney would not work.
‘Sydney is a marquee port and it is where everyone wants to go,’ Douwes told Cruise New Zealand delegates.
However, he said Auckland is an excellent turnaround option for cruises to the eastern Pacific.
Also, after his trip around New Zealand, he feels passengers need more time in its ports. ‘We need to extend the stays,’ he said.
Young was positive about Auckland becoming a turnaround port for the region. However, there is a marketing job to be done on Auckland.
‘Continue to sell your uniqueness,’ he said. ‘New Zealand is not just an add-on to Australia.’
While expensive cruise ship terminals are not necessary, berths are essential in the long term. ‘Tenders are a nonsense when you are talking about 6,000 passengers,’ as Young put it.
‘Port investment has to be long term,’ he said. ‘You should be looking at the next 50 years.
‘Cruise lines are investing by the bucketful, but new ports are not coming on line at the same rate of newbuilds.’
Looking at the world’s penetration rates, he said the cruise industry has a very long way to go.
Copyright © 2022. All rights reserved. Seatrade, a trading name of Informa Markets (UK) Limited.
TAGS: people ports & destinations cruise lines
0 comments
Hide comments
Related