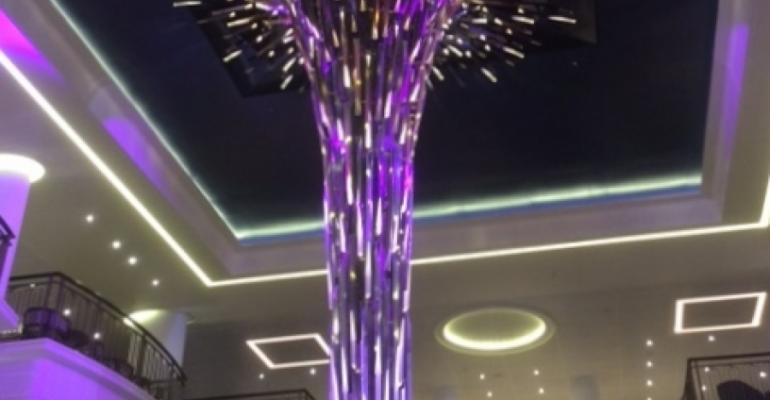 He was speaking on board the 141,000gt addition to the fleet as it was formally handed over by Fincantieri's Monfalcone yard.

Dingle praised the teams from Fincantieri, their suppliers and contractors as well as Carnival's own newbuild team for their efforts.

'This magnificent ship meets and exceeds expectations. This has been no ordinary ship to build, and the results are truly impressive,' he told guests at the hand-over ceremony.

For the first time in its newbuild programme, P&O Cruises commissioned one interior design company and gave it full responsibility for the decor of all Britannia's public rooms.

The result of the Richmond International team's efforts—led by director Terry McGillicuddy—attracted critical acclaim as the wraps came off their interiors for the first time.

With 3,611 lower berths and full occupancy for 4,324 passengers the €520m ship increases P&O Cruises' capacity by 24%, and the Carnival UK chair said Britannia is set to have a significant impact on the overall UK market, taking total annual British passenger numbers closer to 2m.

The consistency of Richmond International's design concepts creates a striking, flowing environment on board from the vast atrium with its 'starburst' centrepiece to the subtly selected surface materials and colour palettes.

'We are thrilled and excited to be taking delivery of the largest ship ever built for the UK market,' Carnival UK ceo David Noyes said. 'Britannia is the most exciting representation of the P&O Cruises experience yet.'

The ship sports P&O's new livery, a stylized 97-metre Union Jack draped over the bow. It's also the first modern cruise vessel delivered by Monfalcone with two funnels. The last passenger ship the yard built with that feature was Eugenio C in 1966.

Fincantieri has produced 68 cruise ships since 1990 and currently 16 more are being designed or built in the group's yards.

Britannia leaves the Fincantieri yard next Friday and is scheduled to arrive Southampton the following week. After a hectic inaugural schedule, the ship will be officially named at a ceremony on 10 March.