A night to remember in Cunard's second home 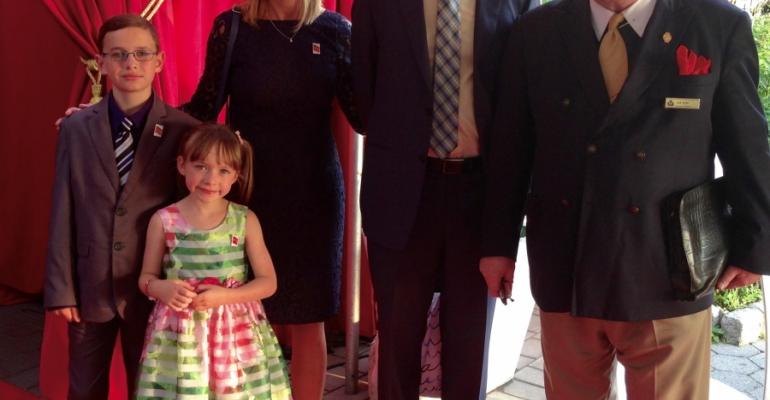 There are cruise events, and there are Cunard events.

Everybody at a Cunard event has a fascinating story, connection or history. Unlike many cruisers, they all remember the ship names and the years. Very often those occasions involved a world event, a celebrated figure or a life-changing turn.

So it was this week at Battery Gardens Restaurant on the southern tip of Manhattan's Battery Park where Cunard threw a party for Queen Mary 2's sail-away. The liner had just completed tracing the voyage of Cunard's first flagship, Britannia, when it inaugurated mail and passenger service across the Atlantic in 1840.

Queen Mary 2 left Liverpool on July 4, 175 years to the day Britannia set sail, and continued to Halifax and Boston. The journey ended at what has become Cunard's second home.

The day has been recorded—the dawn escort by a flotilla of vessels including the historic John J. Harvey fireboat into the Red Hook, Brooklyn, terminal, and Capt. Kevin Oprey ringing the closing bell at the New York Stock Exchange flanked by Carnival Corp. & plc brass. Then the captain, officers and Cunard executives visited the landmark Cunard Building at 25 Broadway.

That evening at the Battery, a bevy of Cunard bellmen with fashion-model looks greeted arriving guests. There was Hugh Paton, a direct descendant of Sir Samuel Cunard—'three "greats" and "grandson,"' as his wife Jill clarified. Two of their children, Geoffrey and Victoria, were along—their generation makes four 'greats.'

Cunard ceo David Noyes called the 175th anniversary 'a milestone we're humbled by and grateful to share.' Without Cunard, he said, there would have been no charge of the Light Brigade in the Crimean War (when the Arabia transported the horses), perhaps no Titanic survivors if the Carpathia had not been nearby and no D-Day if hundreds of thousands of US troops had not been carried overseas by Cunard ships.

Cunard also transported 2.5m immigrants—among them, Micky Arison, who came to the US aboard the second Mauretania in 1954 and grew up to acquire Cunard.

After the Hibernia arrived in 1847, 'New York has made us feel welcome ever since,' Noyes said. 'Heartfelt thanks to our enduring relationship with this city.'

Cunard North America president Rick Meadows called it 'a terrific day' and Queen Mary 2 'an icon in the world of luxury ocean travel and the only ocean liner in the world today.'

Stephen Payne OBE, naval architect of the Queen Mary 2, was on hand, along with the acclaimed maritime artist Robert G. Lloyd, who has painted all the Cunard Queens and completed a painting during the crossing which was sold at auction for charity on the last day. He talked with Tom Cassidy, president of The World Ocean & Cruise Liner Society.

Commodore Everette Hoard of the Queen Mary in Long Beach, California, was there, too.

And Virginia Sheridan and Morris Silver of Finn Partners (formerly M. Silver Associates), who as Cunard's US public relations agency, had planned QM2's Southampton christening ceremony and naming by Queen Elizabeth in January 2004.

Some of the greatest maritime chroniclers were present—'Mr. Ocean Liner' Bill Miller, who had been aboard Queen Mary 2 as a speaker since Liverpool, and Ted Scull, author, travel writer and lecturer.

Scull had very much been looking forward to the event as he would be celebrating with a lot of people—many he knows—the trans-Atlantic crossing tradition Cunard has upheld for 175 years.

'We all had lots of ship stuff to talk about. What could be more fun!' he said.

Scull's own history with Cunard began 51 years ago this month when he sailed from Liverpool in the Sylvania as a returning student about to take up a first job. He has made 45 Cunard crossings.

While Scull was chatting with Commodore Warwick, the Queen Mary 2 appeared from behind Governors Island and, he recounted, 'All heads turned towards her like none other—she looks like a liner, and acts like a thoroughbred, regardless of the weather out there in the Atlantic.'

The ship was moving to the Statue of Liberty for a sound and light show before striking out, once again, across the sea.

Among those mesmerized at the water's edge in Battery Park was Heather Bain.

'I came as a baby on the original Queen Mary,' she told Seatrade Cruise News.

On Tuesday she went aboard Queen Mary 2 with her father and they were 'so overcome by the experience' that they're now planning a family cruise on the liner next year to celebrate his 80th birthday.