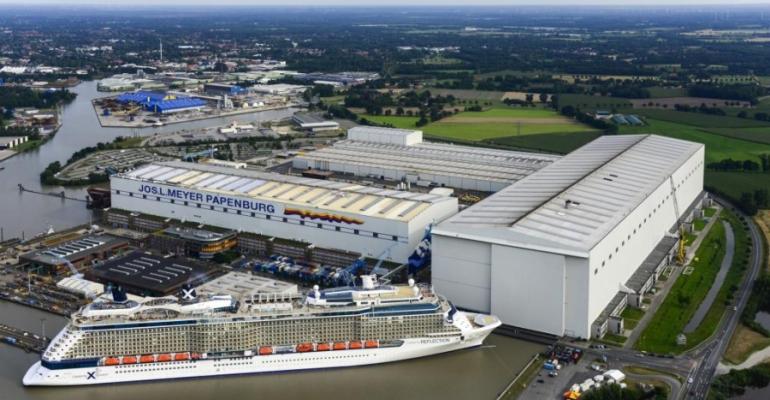 All jobs are going to be retained in Germany and Finland after the acquisition of a 70% stake in STX Finland's Turku shipyard by Meyer Werft, and contracts with suppliers will be honored. Moreover, an agreement is being prepared to ensure Meyer’s continued presence in Papenburg long-term.

Meyer Werft managing partner Jan Meyer stressed that 'job cuts are not an issue,' either at Turku, Rostock or Papenburg, adding: 'We are equally strengthening all our locations.'

In the Papenburg region Meyer has about 3,100 employees; another 3,800 jobs are generated through local suppliers. Meyer stressed that neither direct employees nor those working for contractors need to worry about the STX Finland deal. On the contrary, 'positive impacts are gained through an enhanced flexibility,' he said.

The chairman of Meyer Werft’s works council acknowledged the deal in a statement, calling it 'a historic day' for the company. He said it strengthens Meyer’s position and makes the yard more robust against fluctuations in the global shipbuilding market.

The minister for economic affairs of the federal state of Lower Saxony, where Papenburg is located, also praised the Meyer/STX deal.

Initially, negotiations between Meyer and STX Europe as well as the Finnish government raised concerns in the Papenburg region. It was feared that the Papenburg yard could face disadvantages following the acquisition of the Turku site.

Meyer’s works council in June delivered management a list of 10 claims related to the pending deal. Among other issues, the paper called for 3,100 jobs to be retained at Papenburg in the long run, the establishment of a joint works councils committee from Finland and Germany, a pledge that the vertical range of manufacturing at Papenburg would not be reduced, investments should be maintained and quotas for apprenticeships and the hiring of apprentices should stay in place.

The outcome of the Meyer-STX negotiations suggest fears in the Papenburg region were widely unfounded and the works council’s demands will be met.

Moreover, preparations are under way for a multilateral agreement securing and strengthening Meyer’s Papenburg site for the very long run. Respective negotiations include Meyer’s management, the Lower Saxony Federal State Ministry for Economic Affairs, the works council and the IG Metall trade union. The negotiating partners intend to reach a definitive agreement this autumn.

The terms for Meyer's 70% acquisition of the STX Finland Turku yard have not been disclosed.