No price slashing seen but value-adds could be helping Europe: UBS 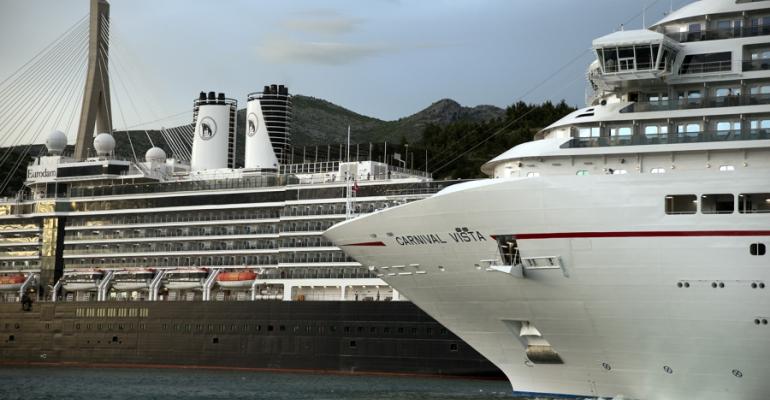 Carnival Vista and Holland America Line's Eurodam met in the Adriatic in May (Photo: Andy Newman)

While most summer Europe cruises are now within the 70- to 90-day penalty period when lines could discount without having to re-price existing bookings, they're not slashing fares, UBS said in a research note ahead of Carnival Corp.'s second quarter earnings report Tuesday.

'Cruise lines have inventory to sell in the Caribbean and Europe, but the Caribbean is not seeing fire sales as they have in previous years. Europe is still a concern, but not different from two to three months ago,' Farley told investors.

Concerning Carnival, the brokerage estimates Q2 earnings per share of 38 cents, in line with the Wall Street consensus and compared to the company's guidance of 34 cents to 38 cents. Year-ago EPS was 25 cents.

Since Carnival last updated its guidance, fuel cost and foreign exchange combined may have a net negative impact of 3 cents to 4 cents per share, UBS estimates.

But the brokerage doesn't see any risk to the company's full-year yield guidance. Farley's forecast of a 3.7% constant currency net yield increase compares to the Street's 3.4% projection, and guidance of approximately 3%, including reclassification accounting. This compares to Royal Caribbean's 2.5% to 4% range and Norwegian Cruise Line Holdings' 4% guidance.

Farley noted Carnival didn't raise its guidance after a strong Q1, so she thinks the company has 'cushion to mitigate near-term Eastern Med softness.' Carnival beat Q1 forecasts on strong close-in Caribbean bookings. The Caribbean accounted for about 47% of Carnival capacity in Q1, and Farley estimates that went down to 31% in Q2 and will approximate 23% in Q3 and 29% in Q4.