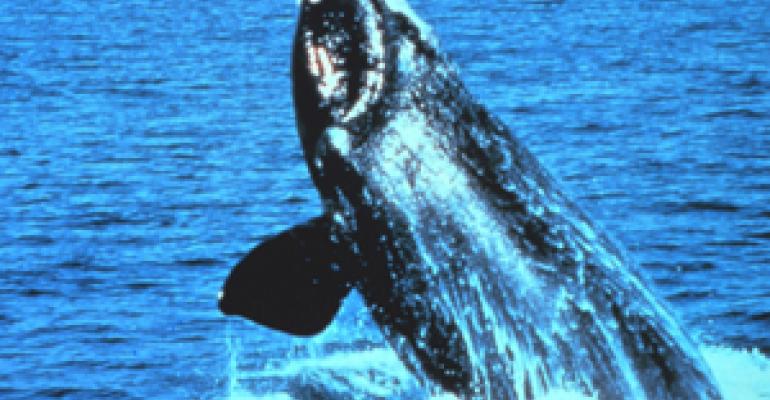 The National Oceanic and Atmospheric Administration’s policy of notifying—but not necessarily citing—speeding vessels in protected areas along the US East Coast was effective in lowering their speeds through sensitive areas, protecting the critically endangered North Atlantic right whales from ship collisions, while keeping punitive fines to mariners to a minimum, according to a new study.

A NOAA regulation instituted in December 2008 requires vessels 65 feet or greater in length to travel at speeds of 10 knots or less in areas seasonally occupied by the North Atlantic right whale.

The NOAA-led study looked at the compliance with speed regulations by 8,009 individual vessels that made more than 200,000 trips between November 2008 and August 2013, mostly in areas where the whales are known to travel. Some were remotely monitored by radio signals sent from the vessels.

Compliance with the regulation was low at the beginning of the regulatory period but steadily improved, according to the study. Vessels that received fines or citations later showed improved compliance. Informational letters issued by NOAA’s Office of Law Enforcement, monthly public summaries of vessel operations and direct at-sea radio contact also were effective in keeping the vessels in compliance with the law.

'We’ve shown that notifying the mariners of their responsibilities, along with issuing citations when applicable, results in widespread compliance,' said Donna Wieting, director of the NOAA Fisheries Office of Protected Resources. 'We appreciate working with the industry as a trusted partner in conserving natural resources and endangered species.'

North Atlantic right whales, among the most endangered of marine mammals, are highly vulnerable to collisions with ships. The two biggest threats they face are ship strikes and entanglements in fishing gear. Scientists estimate that there are approximately 450 of these whales alive today.

NOAA scientists have not seen one critically endangered right whale that has been struck by a large vessel in the areas where the ship strike reduction rule applies since it went into effect.

The study, 'Compliance with Vessel Speed Restrictions to Protect North Atlantic Right Whales,' was authored by Gregory Silber, coordinator of recovery activities for large whales with NOAA Fisheries Office of Protected Resources, along with Jeffrey Adams and Christopher Fonnesbeck of the Vanderbilt University School of Medicine. It will be published in 'PeerJ,' an online open access journal.