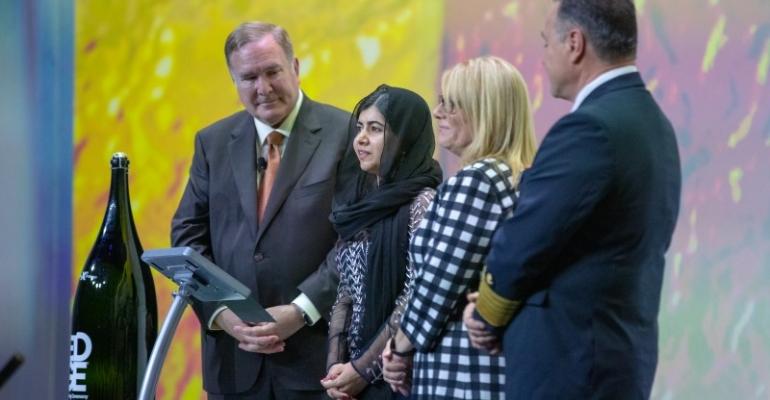 'I'm proud to dedicate my life to fighting for girls' education,' Malala said. She hopes that as Celebrity Edge travels the world, it will inspire people to effect change
Celebrity Cruises ushered in its extraordinary new Celebrity Edge with an inspirational naming ceremony highlighting inclusion and opportunity for girls and women.

This was underscored by the fact that 30% of the crew, including deck officers, are women, and the godmother was Nobel Peace Prize laureate Malala Yousafzai, champion of education for girls. The Grammy-nominated singer and songwriter Andra Day performed her anthems 'Rise Up' and 'Stand Up For Something' at the festivities.

Even Royal Caribbean chairman and CEO Richard Fain, who's overseen plenty of moving cruise ship inaugurals, got choked up when introducing Malala, 21. He recounted her courage in surviving an attack on her life to become an 'inspirational leader for the right of all women to an education.

'It is her humanity that comes through. Malala is rousing a generation,' Fain said. 'I hope her message extends to our company, our crew and our guests,' he continued. 'Her courage inspires all of us.'

Dedicated to fighting for girls' education

'I'm proud to dedicate my life to fighting for girls' education,' Malala said, noting that the world sits back and relies on activists to make change. But a lot needs to change—laws, cultures, countries and companies—she said, adding that Celebrity Cruises in its partnership with the Malala Fund is driving change, and she hopes Celebrity Edge as it travels the world will inspire people to action.

Celebrity has just hired its third woman captain, and one of its deck officers on Edge is a Ghanaian, the first African women to work as a bridge officer for the line. All this has been at the instigation of Celebrity president and CEO Lisa Lutoff-Perlo.

'We believe in diversity and inclusion, as represented by the crew from more than 70 countries,' Lutoff-Perlo said. She showed how Celebrity was able to get Malala to agree to become the godmother—with a video of women crew from many nations imploring her, in many languages: 'Please say yes!'

A ship built for opening people to the world

Pointing to Edge's infinite veranda staterooms, the Magic Carpet platform that extends over the side of the ship and rises from sea level to the top deck, and the triple-deck, glass-enclosed Eden lounge, Lutoff-Perlo said the ship is built on a purpose, to open people to the world.

As Andra Day sang 'Stand Up For Something,' a video of Malala's work played in the ship's main lounge. Ringed by Fain, Lutoff-Perlo and Edge Capt. Costas Nestoroudis, the godmother said: 'I name this ship Celebrity Edge. Bless her and all who sail in her.'

She then signed her name to a tablet, triggering an electric signal that released a giant bottle of Badoit sparkling water—in place of the traditional Champagne—smashing against the hull. Confetti rained down. And this was no ordinary confetti, but printed with inspirational sayings from Malala.