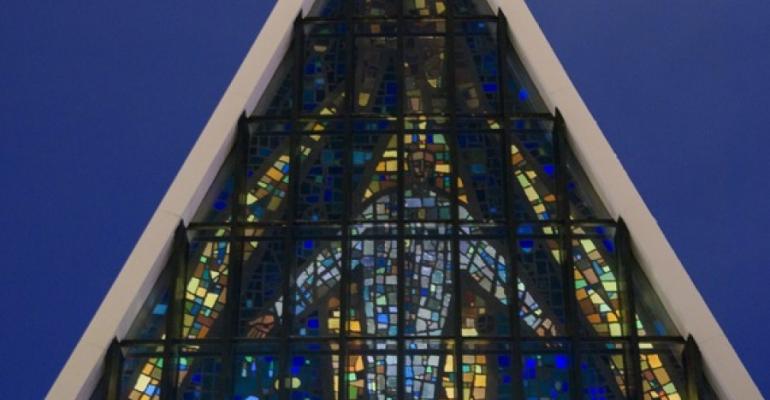 The Arctic Cathedral Tromso
Northern Norway’s appeal as a destination continues to grow and the 12 ports that are members of Cruise Northern Norway and Svalbard (CNNS) are anticipating more than half a million day visits in 2019, compared to 487,000 in 2018.

The passengers are counted each time they disembark at a North Norwegian port. So around 150,000 passengers travelled to the region, visiting an average of around three ports. Cruise visitor growth in the region in 2018 was up 16%, year on year.

Tromsø the most popular port

Narvik is experienced expotential growth. The number of arriving passengers in 2018 quadrupled to more than 9,000. The prognosis for 2019 is equally impressive with more than 24,000 passengers expected to arrive. This represents a 12-fold increase in the number of cruise passengers to Narvik in the space of two years.

Harstad and Vesterålen are also growing their business. Both ports can expect just over 8,000 passengers in 2019 after also experiencing growth in 2018 compared to the previous year. Bodø is expected more than 30,000 passengers, which is triple the number from two years ago.

‘There was good growth in the number of calls and passengers in 2018. The prognosis for 2019 shows that this trend will level off somewhat. It is extremely pleasing to see that the smaller ports are experiencing by far the largest growth,’ said Erik Joachimsen, managing director of CNNS.

He also noted winter cruises to Northern Norway are selling at record speed, ‘which will almost certainly lead to cruise lines having even greater focus on the winter season.’

Joachimsen said another reason for optimism for the ports of North Norway is that, ‘recent developments in the fjords in Western Norway, where several cruise lines are encountering obstacles to cruise calls, means that the cruise lines are now looking for alternative sailing routes.’

Northern Norway and Svalbard together have just as many passengers per year as Bergen – Norway’s most popular port.

‘The potential for increased cruise traffic to the north is better than ever since the region has the capacity and willingness to focus on cruise all year round. Our members have excelled at adapting increasingly more to activity-based tourism, which in turn adds value to shore-based tourism,’ concluded Joachimsen.