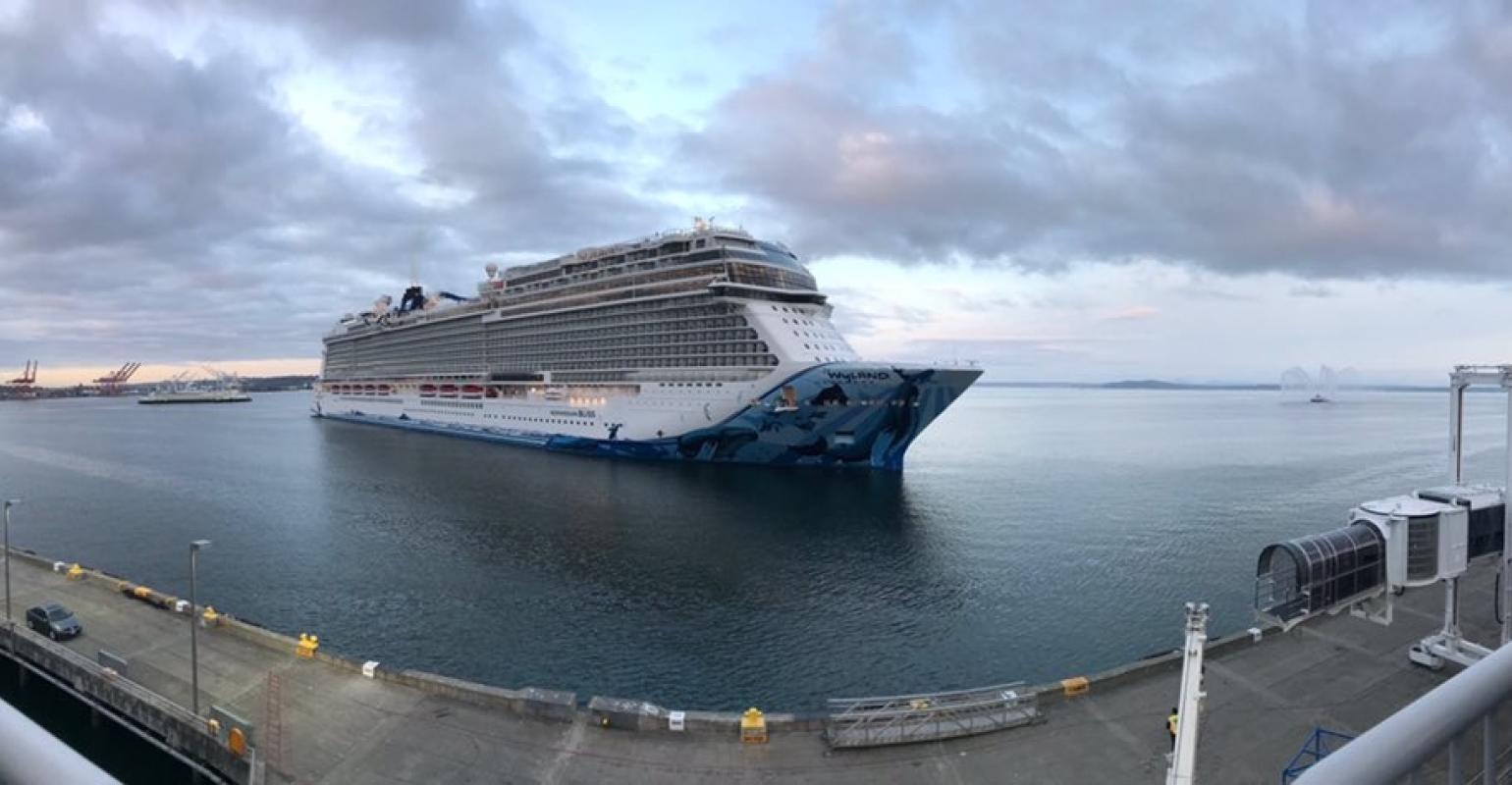 Record-breaker Norwegian Bliss arrives at the Port of Seattle's Pier 66 early Wednesday
On its journey to summer homeport Seattle, Norwegian Bliss has been breaking records every step of the way as the largest cruise ship to transit the Panama Canal and to visit the US West Coast. Today at Pier 66 Bliss is turning heads, stopping joggers and bikers in their tracks and getting photographed like crazy.

The 168,000gt vessel's arrival Wednesday morning marked a 'major milestone,' according to the Port of Seattle. Over the past 18 years the port has transformed to achieve the largest and fastest growing cruise business on the West Coast, while earning a reputation for progressive environmental protections.

NCL first to homeport in Seattle 18 years ago

The port has a special relationship with Norwegian Cruise Line, since it was the first to homeport in Seattle, in 2000.

Through a public-private partnership, the port and the cruise line teamed to renovate and expand the Bell Street Cruise Terminal at Pier 66 to handle Norwegian Bliss. The work was completed last year.

'The Port of Seattle is thrilled to host the magnificent Norwegian Bliss and her passengers for many Alaska cruise seasons to come,' Port of Seattle Commission president Courtney Gregoire said. 'Cruise ships like Norwegian Bliss meet our objectives of increasing economic opportunity in our region while constantly raising the bar on environmental sustainability. We thank Norwegian for their 18 years of partnership with the Port of Seattle, and look forward to many more to come.'

Today, for the first time in Norwegian's history, it will christen a ship in Seattle when Norwegian Bliss is named by godfather Elvis Duran, the New York City radio personality.

'We look forward to a promising future and continuing to work with the Port of Seattle to further expand cruising opportunities in the Pacific Northwest,' Norwegian president and CEO Andy Stuart said.

Seattle's cruise industry is a major economic driver for the region, providing more than 4,000 jobs and over $500m each year. The port is due to handle more than 1m revenue passengers for the second year in a row.

Cruise lines managed wastewater discharge long before this year’s enactment of the 'No Discharge Zone' ban on treated and untreated discharges in Puget Sound. The MOU requires the highest treatment level—using advanced wastewater purification systems—avoiding discharges near shellfish beds and the discharge of untreated graywater. For the past seven years all cruise ships visiting the Port of Seattle have elected not to discharge at all in Washington waters.

The Port of Seattle also provides clean shore power at two cruise berths at Terminal 91 and is exploring opportunities to further expand access to shore power, including at Pier 66.

The port was also an early supporter of international regulations to establish the North American Emission Control Area, which limits the sulfur content in fuels used in ships when they are within 200 miles of the coast. Many cruise ships calling Seattle have installed exhaust gas cleaning systems, or scrubbers, an alternative method to clean their exhaust and meet the ECA's emission requirements.