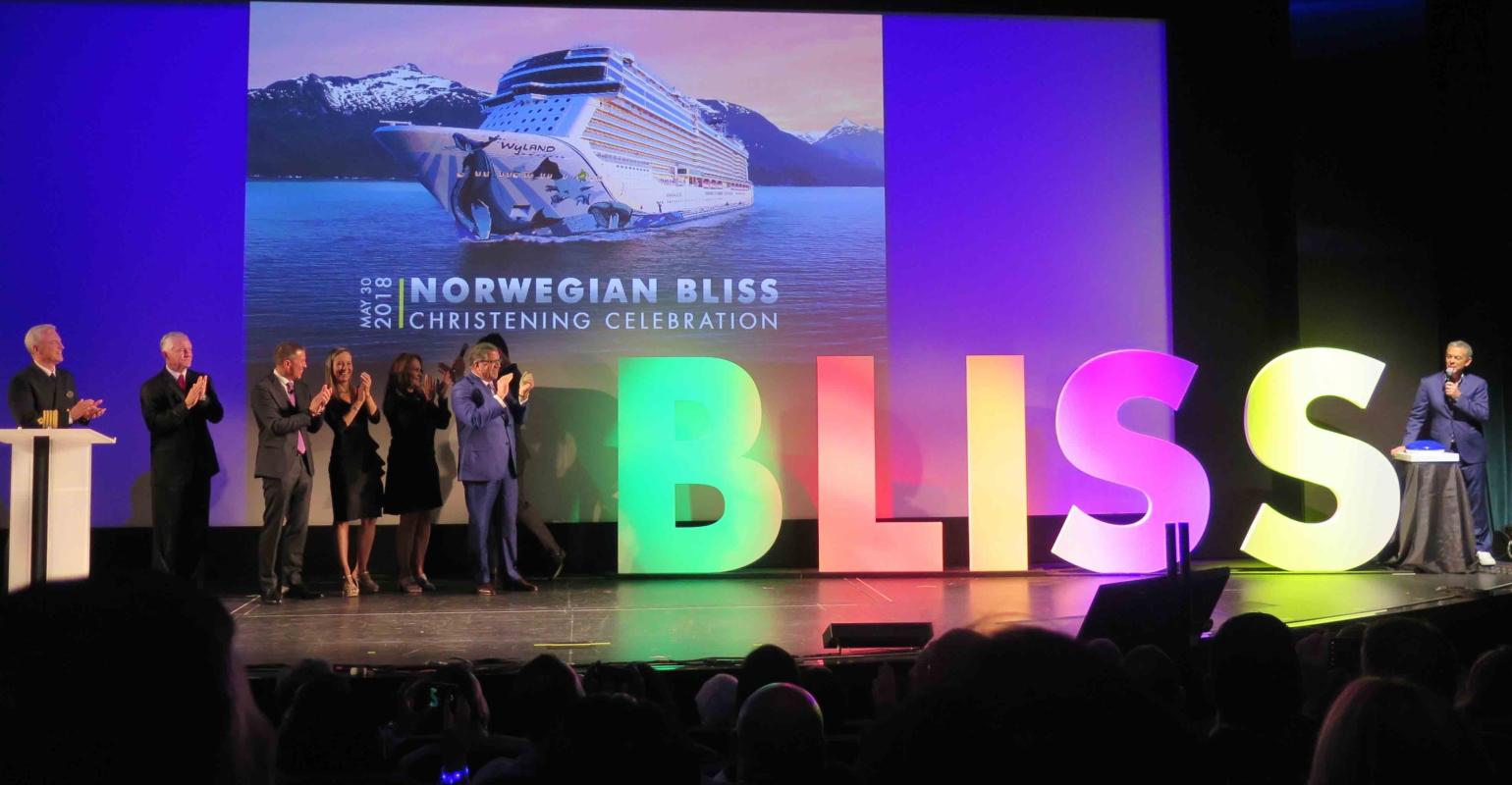 Norwegian Bliss, the largest cruise ship ever to sail the US West Coast, was named in Seattle by a godfather from the East Coast who pulled in legions of fans—listeners and celebrities—nationwide.

A ship for 'the ultimate Alaska experience'

Del Rio called Bliss 'a showcase ship to provide our guests with the ultimate Alaska experience,' pointing to the 180-degree Observation Lounge and The Haven's plush Horizon Lounge above it, the big outdoor promenade The Waterfront and the fact that more than 70% of the accommodations have balconies.

Norwegian Bliss is expected to carry more than 80,000 passengers during its inaugural Alaska season and is the 'cornerstone of the largest deployment to the region in Norwegian's 50-plus-year history.'

Duran and his posse were all over the ship in naming festivities that took place across a bevy of lounges. In the main Bliss Theater, guests got a live taste of the on-board entertainment, including a sizzling mambo from the 'Havana' show and Frankie Valli hits from 'Jersey Boys,' plus a set by the West Coast band Train that got everyone on their feet.

Alaska Gov. William Walker, an avid cruiser, bemoaned the fact his schedule kept him from trying the Norwegian Bliss racetrack. 'But every Tuesday this vessel will be in Juneau. I'm marking my calendar,' he said.

Port of Seattle Commission president Courtney Gregoire noted that 18 years ago, 'Norwegian Cruise Line put the Port of Seattle on the world cruise map' by homeporting Norwegian Sky there. 'Since then, the growth has been dramatic,' she said, with 1m revenue passengers projected for the second year in a row. For the naming Bliss was alongside the Bell Street Cruise Terminal at Pier 66, upgraded last year to the tune of $30m by the port and NCLH.

The festivities were punctuated with video congratulations to Elvis Duran from scores of his celebrity friends, ranging from Demi Lovato to Kathie Lee Gifford. Norwegian Escape godfather Pitbull ('Mr. 305') was among them, prompting Duran to quip: 'Does this mean I have to shave my head or become Mr. 212?'

'Time to sacrifice a beautiful bottle of defenseless Champagne'

When it came time for the actual naming, the huge B-L-I-S-S letters on stage in the Bliss Theater were lighted one by one, and Duran said: 'It's time to sacrifice a beautiful bottle of defenseless Champagne. Can't we use water?'

He then pushed a button, smashing that 'defenseless' bubbly on the hull.