Norwegian Bliss to sail from Miami starting in late 2018 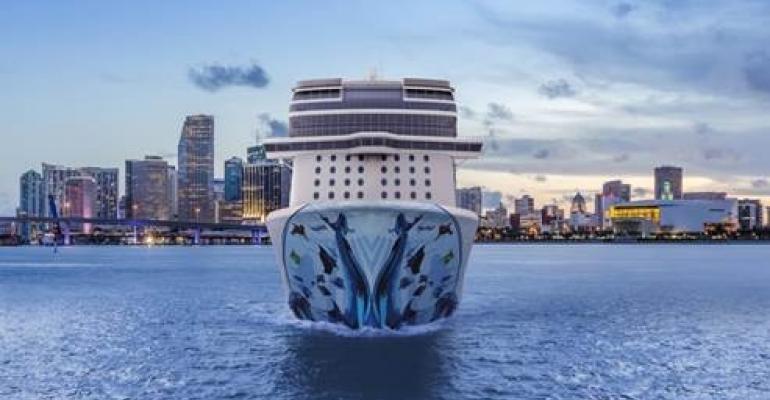 As expected, PortMiami will be Norwegian Bliss's winter home, following its inaugural summer in Alaska
After its inaugural summer in Alaska, Norwegian Bliss will sail seven-day eastern Caribbean cruises from PortMiami starting in November 2018. The ship will reposition from Seattle via several Mexican Riviera cruises and a Panama Canal sailing through the expanded locks.

This deployment was anticipated.

'As the Caribbean is our most sought-after winter destination, there was no question that Norwegian Bliss would sail from Miami,' said Andy Stuart, president and ceo, Norwegian Cruise Line. The Caribbean itinerary includes St. Thomas, Tortola and Nassau.

During a ceremony to announce the deployment at the company’s corporate offices in Miami, Stuart was joined by Norwegian Cruise Line Holdings Ltd. president and ceo Frank Del Rio and Miami-Dade County officials.

Miami-Dade County Mayor Carlos Giménez welcomed the company's continued commitment, adding that cruise lines and their passengers are vital to the continual economic growth and development of the tourism industry.

En route to Miami following the completion of its Alaska season, Norwegian Bliss will sail one five-day Pacific coastal cruise from Vancouver, BC, to Los Angeles on Sept. 30, with an overnight stay at Vancouver and calls at Victoria, BC, and San Francisco. After that seven-day Mexican Riviera cruises visit Puerto Vallarta, Mazatlán and Cabo San Lucas, adding Ensenada on an eight-day itinerary.

Norwegian Bliss will depart Los Angeles Nov. 3 for a 14-day journey to Miami through the new locks of the expanded Panama Canal, with calls at Puerto Vallarta, Manzanillo, Puerto Quetzal (Guatemala), Puerto Caldera for Puntarenas (Costa Rica) and Cartagena (Colombia).

Norwegian Bliss features include a 180-degree Observation Lounge located forward on Deck 15. Spanning 20,000 square feet, the lounge will offer floor-to-ceiling windows for vistas of Alaska and the Caribbean.

Accommodations include staterooms for solo travelers, family-friendly connecting rooms and 80 suites in The Haven by Norwegian, a three-deck enclave with keycard access. The Haven also offers its own observation lounge.

Studio staterooms for solo travelers have virtual ocean views. The 82 studios are located near a dedicated lounge with keycard-entry. Select studios connect, to serve single friends traveling together.

Plus, there are 374 inside staterooms with two lower beds that convert to a queen, and some inside rooms have up to two additional Pullman beds.

The 167,800gt Norwegian Bliss is under construction at Meyer Werft. It's the third Breakaway-Plus vessel, and follows China-dedicated ship Norwegian Joy in 2017 and 2015's Norwegian Escape.