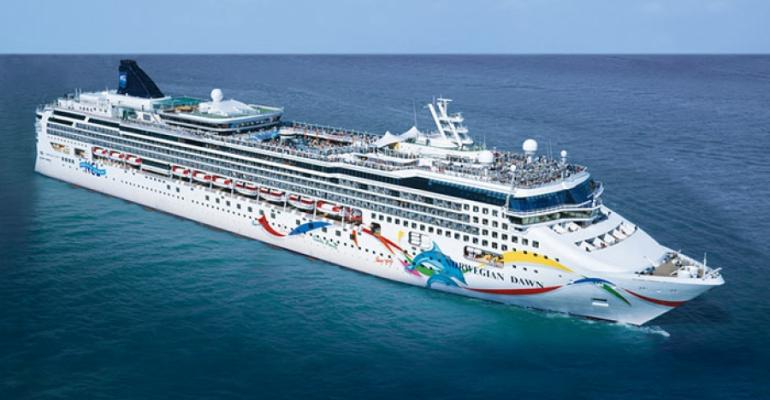 Wednesday 1:30 p.m. update: Following a thorough assessment of Norwegian Dawn by Norwegian Cruise Line's technical operations team, an independent dive team and DNVGL inspectors, the ship was cleared to sail and departed from Bermuda. The next cruise from Boston is to operate on Friday as scheduled. The steering malfunction that led the ship to stray slightly off course and ground on a reef was caused by a spare oil pump that was incorrectly installed, Norwegian evp and cfo Wendy Beck said during a short conference call. She said inspections had confirmed there were no issues 'other than minor scratches' on the hull.

The company expects the impact of the incident to be immaterial and the previously provided second quarter and full year earnings guidance stands.

NCLH ceo Frank Del Rio said there had been no cancellations.

NCL president Andy Stuart had flown to Bermuda along with a technical team. The inspections of Norwegian Dawn alongside at Heritage Wharf confirmed the ship's structural integrity, and the technical issue that caused the steering malfunction was identified and corrected.

The ship has resumed its return to Boston and is expected to arrive on Friday as scheduled, and the next cruise will depart Friday as planned.

The company apologized to passengers for the inconvenience caused by the incident and is providing a future cruise credit of 15% of the fare paid for the current voyage.

Norwegian Cruise Line said the ship's officers, engineers and lead technical teams, along with classification society DNVGL inspectors and a team of independent divers, are working on a complete assessment of the vessel.

The ship remains fully operational and passengers can use all amenities and services, NCL said. Passengers also have the opportunity to go ashore this morning.

According to a company spokesman, a further update is expected later this morning.

11 p.m. Tuesday update: Norwegian Cruise Line blamed a temporary malfunction of Norwegian Dawn's steering system, causing the ship to sail slightly off course on departure from Bermuda, for its grounding on a reef and said on-board personnel and a dive team confirmed the ship's structural integrity. With high tide, Norwegian Dawn was refloated and moved to a nearby anchorage position, where it will remain overnight.

The ship will be inspected by classification society DNVGL before returning to Boston. It is fully operational.

No injuries were reported.

The ship's team is currently assessing the situation and Norwegian said it would provide more information as it becomes available. Passengers on board tweeted that a dive team and two tugs were on site within a couple hours of the incident.

Norwegian Dawn had just concluded a three-day stay in Bermuda. The ship sails Fridays from Boston.

The 92,250gt Norwegian Dawn was built in 2002. It underwent a major drydock refurbishment in May 2011 that included the replacement of one engine, as well as preventative maintenance and the removal and replacement of both bearings on the port and starboard Azipods.