Norwegian Escape completes its conveyance to the sea 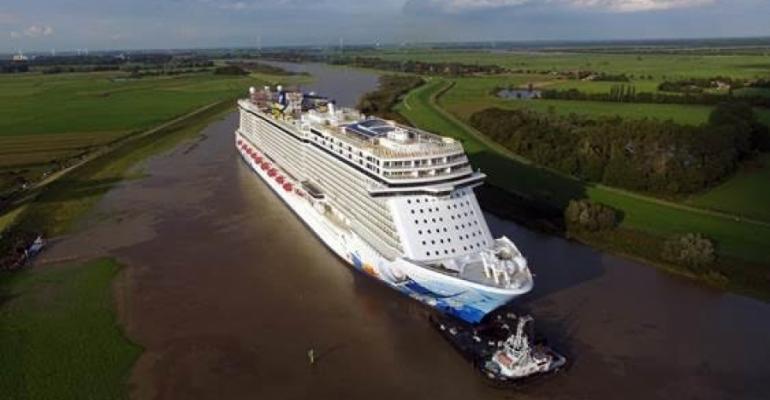 Norwegian Escape during its conveyance along the Ems River (Photo: Patrick Buß)

Norwegian Escape arrived safely at the Dutch port of Eemshaven on the North Sea early Saturday morning, following its conveyance along the Ems River from Meyer Werft at Papenburg, Germany.

At Eemshaven, the ship will take on additional provisions and materials, and have its lifeboats installed, before leaving for sea trials that are expected to start on Thursday.

Guided by tugs, the 164,600gt Norwegian Escape moved slowly along the river and through the locks stern-first, following the traditional safety procedure to maneuver large ships. As the ship left the Papenburg harbor, there was just 1.2 meters of clearance between the hull and the 'bumpers' that were installed along the starboard side of the yard's locks.

'After seeing first-hand this week how spectacular Norwegian Escape already looks, I am thrilled that she is officially on her journey to welcome guests next month,' said Andy Stuart, president and chief operating officer of Norwegian Cruise Line.

This is the first of Norwegian's four Breakaway Plus ships from Meyer.

After introductory activities in Europe, Norwegian Escape is due to arrive at its year-round base, PortMiami, in early November, where the naming ceremony will take place.