Norwegian Escape largest ship to start a cruise from Hamburg 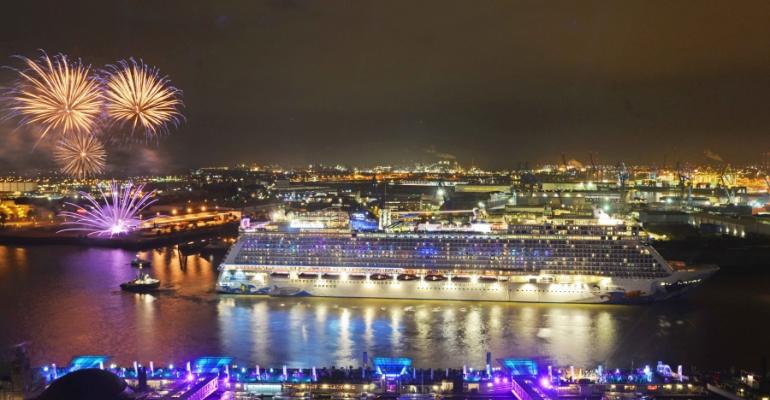 Fireworks and thousands of onlookers bid farewell to Norwegian Escape as the largest ship that has ever begun a cruise from Hamburg departed Saturday evening.

Norwegian Escape is nearly 20 meters shorter than the city's beloved Queen Mary 2, but at 164,600gt it is larger overall. And while both Quantum of the Seas and Anthem of the Seas were in Hamburg for pre-delivery checks, neither embarked passengers there.

The newly delivered Breakaway Plus ship is the first in the Norwegian Cruise Line fleet to visit the north German port. Thousands of spectators lined the banks of the Elbe River to watch its arrival and departure.

Norwegian Escape sailed from Hamburg on a short inaugural jaunt to Southampton. There it will be shown off this week before crossing to the US.

It has been an eventful 2015 for Hamburg.

The cruise season wraps Dec. 31 when Aurora calls at HafenCity, capping a year when an estimated 525,000 passengers will have visited on 156 calls. Highlights included the opening of the third cruise ship terminal in Steinwerder, the commissioning of LNG barge Hummel and a week of cruise-related events with Hamburg Cruise Days and Seatrade Europe in September.

Next year Hamburg expects 160 cruise calls and a record 661,000 passengers. The first visitors of 2016 will be Queen Victoria and Queen Elizabeth on Jan. 8.