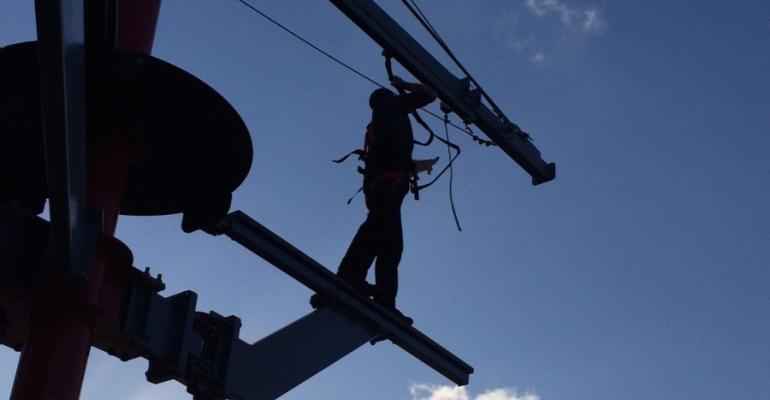 UK guests and media had their first taste of Norwegian Escape on an overnight cruise which left Southampton Tuesday afternoon.

Escape is the first ship in Norwegian Cruise Lines'  new Breakaway Plus Class and represents, 'one more milestone in our history of providing guests with the freedom and flexibility to enjoy their ideal cruise holiday,' commented Harry Sommer, evp international business development of Norwegian Cruise Line Holdings Ltd.

In a one to one with Seatrade Cruise News, Sommer and NCL president Andy Stuart, outlined some of the new spaces and interactive experiences on the 'Plus' class that set the tone for Norwegian's fleet additions in the future and 'makes this a truely premier class ship', they proclaimed.

The four Haven Deluxe Owner’s Suites are the ship’s most well-appointed and spacious accommodation measuring more than 120sq mtr with dramatic floor-to-ceiling windows overlooking the sea. Glistening marble spans the enormous master bathroom, which includes two modern vanity sinks and a bath with equally amazing views. There are also four Owner’s Suites which are 53sq mtr and 25 two-bedroom family villas that sleep up to six guests.

On the dining front Stuart spoke of a multitude of new partnerships with leaders in the fields of dining and beverage to feature innovative branded experiences on board Norwegian Escape, including James Beard Award-winning Iron Chef Jose Garces' two speciality restaurants on board, his first at sea, 'brings Latin-inspired culinary expertise, ranging from classic Mexican dishes to Cuban specialties.' Bayamo by Jose Garces highlights Latin dishes with a heavy Cuban-influence in a chic dining room and al fresco on The Waterfront. Pincho Tapas Bar by Jose Garces offers traditional Spanish tapas à la carte in a lively, casual setting.

Complete with a keg room, 24 draft beers on tap and more than 50 different bottled beers, the District Brew House was a popular hangout on board last night as was the wine bar The Cellars, home to the line’s first wine bar in partnership with Michael Mondavi who has a family Napa Valley estate.

For thrill seekers, the duo picked out the ropes course which features on previous Breakaway class ships but, 'this time it's ropes on steroids', Stuart exclaimed.

'It's a three-story multiplex of heart-pounding challenges with 99 different elements including two planks with six inch wide beams that extend eight feet from the side of the ship  and zip track that starts overlooking the sea which is quite scary if you look down', said Stuart who confessed to beating colleague Sommer in a time challenge however the evp got the better of him when the two went head to head on Norwegian Escape’s new Aqua Racer slide in the water park.

The ship returned to Southampton Wednesday morning to re-embark a new group of passengers for an overnight sailing to nowehere. 2,500 of those onboard are participants in Norwegian Cruise Lines' Try Before You Buy initiative which allows them to get a feel for the ship for an introductory price offer which will be fully refunded if they book a future cruise up to four weeks after the trip. The overnight has been sold by over 500 UK travel agent partners who will also join the sailing.

'It worked extremely well when we introduced this on Breakaway and Getaway UK inaugurals and due to feedback from agents new for this launch we are offering the chance to book a future cruise whilst still onboard', commented Nick Wilkinson, director UK sales of NCL.

The line hopes to get up to 40% conversion rate from the sailing, according to Francis Riley, svp international.