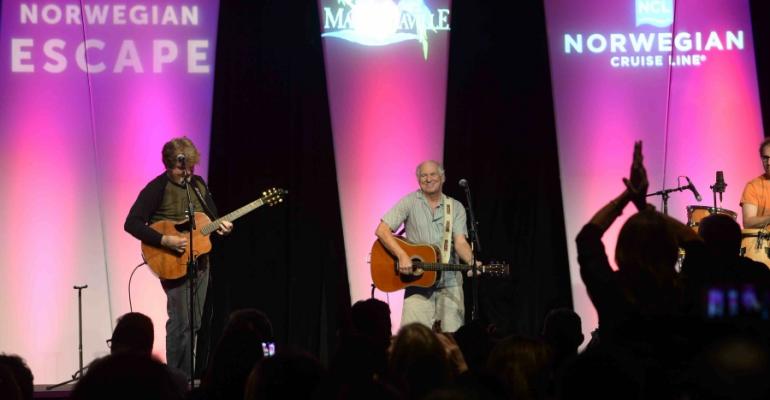 Norwegian's exclusive partnership with Margaritaville Holdings extends to the company's island destinations including the new Harvest Caye in Belize and Great Stirrup Cay, Bahamas, as well as other ships in the fleet.

Sheehan called Buffet 'an icon who embodies the island lifestyle,' and said his Margaritaville portfolio is a perfect fit for Norwegian.

Norwegian Escape's Margaritaville restaurant and bar will have a laid back atmosphere inspired by the lyrics and lifestyle of Jimmy Buffett. Signature items include Cheeseburger in Paradise and Who's to Blame Margarita. This venue will be one of Norwegian Escape's complimentary dining outlets.

'This partnership is a perfect match between two brands that celebrate escapism, relaxing and having fun,' said Margaritaville ceo John Cohlan.

Along with the venues on Norwegian Escape, the partnership includes Margaritaville branded food and beverage locations on Harvest Caye, set to open in fall 2015 and a 5 O'Clock Somewhere Bar on Great Stirrup Cay, planned to also debut in 2015. In the future, the partnership will extend to other ships in the fleet.

Norwegian Escape will begin weekly year-round cruises from PortMiami to the eastern Caribbean on Nov. 14 next year.