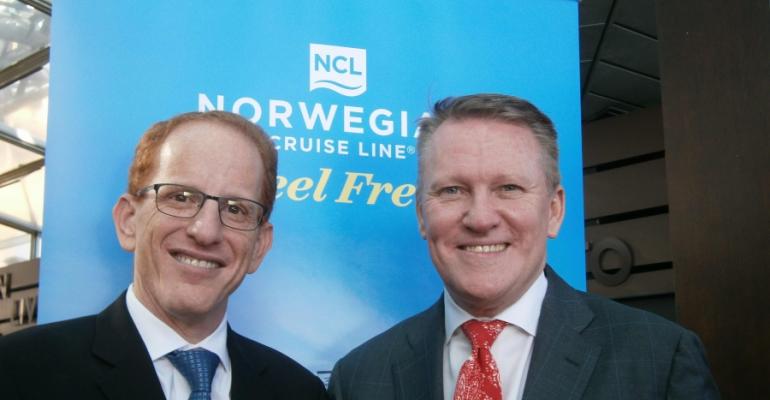 Harry Sommer, left, with Steve Odell, made a lightning trip to Australia for the big announcement (Photo: Helen Hutcheon)

Sommer, who arrived in Sydney Monday and returns to Miami tonight, said Australia is the company’s third global source market after North America and the UK and it is growing.

Pricing for Norwegian Jewel will be higher than its Carnival and Royal Caribbean competitors in Australia but, Sommer said, NCLH has the best product and people are willing to pay for it.

He said Royal Caribbean is going for the 'wow' factor with Ovation of the Seas, which arrives in Sydney for a maiden season on December 15.

Instead, Norwegian Jewel’s focus will be on outstanding food and service—with 16 Freestyle Dining options, nine of them complimentary—and entertainment led by Australia’s acclaimed ballroom dance company, Burn the Floor.

Sommer, who will return to Sydney as a panellist at CLIA Australasia’s third annual Cruise360 on September 16, also singled out Norwegian Jewel's The Haven, an all-inclusive ‘ship within a ship’ private enclave which he said will appeal to the target market of 40- to -55-year-old passengers.

The ship will return for the 2018/2019 summer season after a series of cruises in Asia, with itineraries to be announced shortly.

There are no plans, Sommer added, to send Norwegian Joy, under construction at Meyer Werft in Papenburg for the Chinese market, to Australia. ‘Joy is being customised exclusively for Chinese passengers,’ he said.

‘We almost didn’t come here,’ Odell said, referring to the difficulty in getting slots at the Overseas Passenger Terminal.

After a season in Alaska, Norwegian Jewel leaves Vancouver on October 3, 2017, on a 39-day trans-Pacific voyage to Sydney via Hawaii, French Polynesia, American Samoa, Samoa, Fiji, Vanuatu and New Caledonia.

She will then make a five-day sampler cruise to Tasmania, three round-trips to New Zealand, round-trips to South Australia and Sydney/Auckland and Auckland/Sydney sailings.

On February 20, 2018, she makes a 40-day repositioning voyage from Sydney to Tokyo via Indonesia, Singapore, Thailand, Vietnam, Hong Kong and mainland China, arriving at her destination at cherry-blossom time.