Norwegian orders another pair of Breakaway-Plus ships from Meyer 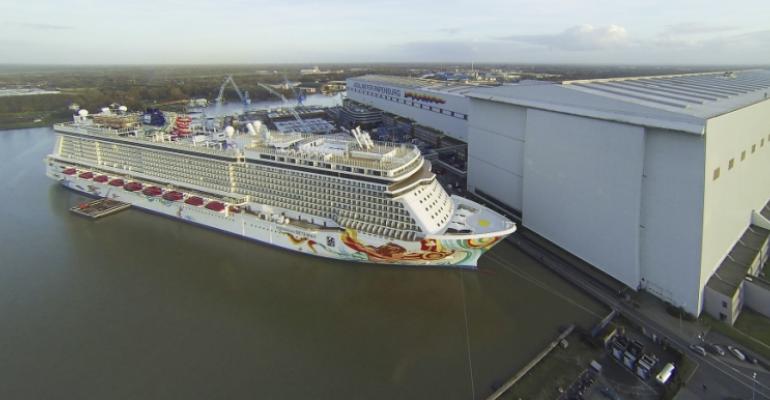 Norwegian Cruise Line placed a €1.6bn order for two additional Breakaway-Plus ships at Meyer Werft. Each 4,200-berth vessel is 164,600gt. Delivery is scheduled in the second quarter 2018 and the fourth quarter 2019.

The two ships follow Breakaway-Plus newbuilds Norwegian Escape, due in late 2015, and Norwegian Bliss in spring 2017.

'Norwegian Breakaway and Norwegian Getaway have proven themselves as industry game-changers and are extremely popular with our guests,' said Norwegian ceo Kevin Sheehan. 'It was only natural that we build on their success with this new ship order that further solidifies our long-term growth strategy.'

The company has export credit financing in place for each newbuild, arranged and underwritten by Germany's KfW IPEX-Bank.

'We are thrilled that Norwegian Cruise Line has the continued confidence in Meyer Werft to expand their fleet,' said Bernard Meyer, managing partner of the Papenburg-based shipyard. 'We are very proud of our longstanding relationship with Norwegian.'

Analyst Robin Farley of UBS Investment Research called the news 'somewhat unexpected at the moment given how much time there is to order for deliveries that far in advance.'

This marks the first business beyond 2017 for Meyer, and takes the builder's ocean-going cruise orderbook to nine ships.

Due later this year is Royal Caribbean International's Quantum of the Seas, followed by sister Anthem of the Seas in 2015, and Norwegian Escape. Meyer has a third Quantum ship in 2016, and a 150,000gt prototype for Star Cruises. Norwegian Bliss and a second Star Cruises ship follow in 2017.

UBS reitrated it expects Carnival Corp. & plc to order a ship by this fall for 2017 delivery, since the company has nothing on order past 2016.