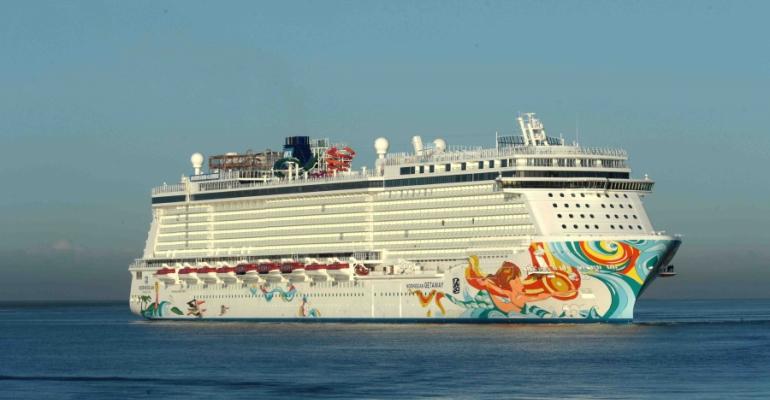 Norwegian Cruise Line boosted third quarter profit by more than 29% on higher ticket pricing and on-board revenue plus the addition of Norwegian Getaway, and issued positive Q3 and 2014 guidance. The Prestige Cruises International acquisition is on track and expected to close in Q4.

Adjusted earnings per share went to $1.11, 3 cents better than the Wall Street consensus expectation and up from 86 cents a year ago. On a GAAP basis, EPS was 87 cents.

The EPS upside was largely driven by a $3.2m foreign exchange benefit, or about 2 cents per share, which is expected to reverse in Q4, Wells Fargo Securities said in a note.

Net yields, including gains of 2.8% for net ticket and 3.7% for net on-board, came in higher than expected due to on-going port and credit card fee savings, both initiatives begun in 2014, and a lower air/sea mix, Wells Fargo analyst Tim Conder said.

The results were reported after market close Wednesday.

'We are confident that we will achieve our target of over 60% growth in full year adjusted EPS that we established at the beginning of the year,' said Kevin Sheehan, president and ceo of Norwegian Cruise Line Holdings.

'In that more than six-year period, Norwegian's adjusted EBITDA has grown at an industry-leading compound annual growth rate of 23% with a commensurate margin expansion of over 1,600 basis points to 27.6%, with future expansion expected as we continue to successfully execute on our strategies,' Sheehan said.

Adjusted net cruise costs excluding fuel per capacity day edged up 2.6% (2.2% on a constant currency basis), which includes the wide-ranging Norwegian NEXT program to elevate the passenger experience. The company's fuel price per metric ton, net of hedges, was $641 compared to $695 in 2013.