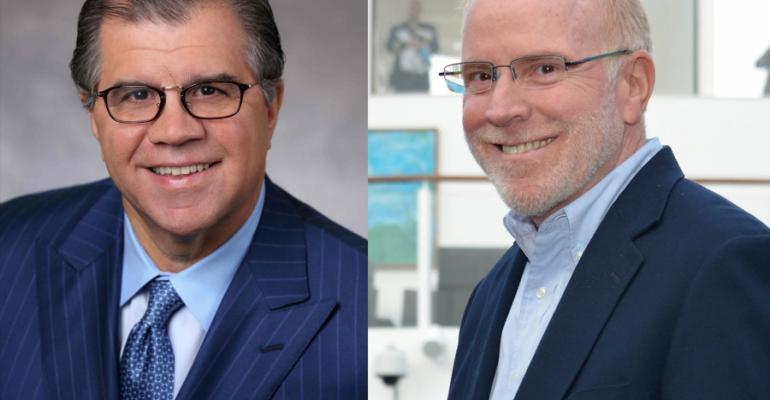 Sheehan will be succeeded as president and ceo of Norwegian Cruise Line Holdings by Frank Del Rio, chief executive of Prestige, the parent of Oceania Cruises, which he co-founded, and Regent Seven Seas Cruises.

'I am excited to begin this new chapter in my long career in the cruise industry,' Del Rio said. 'I am blessed with a great team at Norwegian, and I am confident that together we can help our company continue to realize great things.'

Del Rio, 60, founded Oceania in 2002, carving out an 'upper premium' segment and growing the fleet to five ships including newbuilds. Under his direction, Prestige acquired Regent in 2008. In 2016, Oceania will be adding the former Ocean Princess and Regent will be getting a newbuild. Del Rio previously led Renaissance Cruises.

Sheehan, who had called the Prestige deal 'the most exciting point since my joining Norwegian,' has been overseeing the integration of the three brands, with a shared services team covering a number of areas, and delivering a number of synergies.

'It has been a privilege to lead Norwegian over the last seven years. I am proud of what we have accomplished, and take comfort in the knowledge that I am leaving the company much healthier and stronger than when I joined,' Sheehan said.

In October, he brought on board former Darden Restaurants chief Drew Madsen to succeed him as president of Norwegian Cruise Line, and on Dec. 1 Jason Montague, the former cfo for Prestige, became president and chief operating officer of Prestige, Oceania and Regent following the abrupt departure of Kunal Kamlani.

Sheehan was Apollo’s Management's first hire after it made a $1bn equity investment in Norwegian that closed in early 2008. He joined the brand as cfo in late 2007 then succeeded Colin Veitch as president in August 2008 and as ceo in November that year. For some time Sheehan served as cfo, president and ceo.

Under him, Norwegian swung to a profit in 2009 after years of losses. Sheehan oversaw the successful introduction of Norwegian Epic, and the ordering and launches of Norwegian Breakaway and Norwegian Getaway while also contracting the bigger Breakaway Plus ships. He took Norwegian public in January 2013, fulfilling a company quest dating back 25 years.

Sheehan reinvented Norwegian's management team, improved relations with travel agents and paid extra attention to the crew on the ships, perhaps in part due to his stint as CBS's 'Undercover Boss' where he learned about working on board first hand.

Apollo Management's Steve Martinez, a member of Norwegian's board, thanked Sheehan for his service and noted he built the company into a successful one that has reported '25 consecutive quarters of growth in trailing 12-month adjusted EBITDA coupled with consistent margin improvement.' He credited Sheehan as integral to the Prestige acquisition, 'assembling a diversified portfolio of brands that spans all market segments in the cruise industry, which we believe puts the company in a strong position for the future.'

Martinez called Del Rio an established leader and innovator, adding 'we are delighted to have Frank lead our team during the next phase of the company’s evolution.'

Norwegian currently fields 13 ships with a total of 34,500 berths, while Prestige has eight ships and nearly 6,500 berths. Norwegian has contracted four large newbuilds for delivery from 2015 through 2019, while Regent has one ship coming in 2016. Norwegian Escape, which will become the company's largest ship, is due to enter service from Miami in November.

Sheehan has chaired the Florida-Caribbean Cruise Association since 2010 and had been in line to take over the chairmanship of Cruise Lines International Association starting this year but removed himself from that track for lack of time.

Before joining Norwegian, Sheehan had a successful 30-year career capped by leading Cendant Corp.'s Vehicle Services Division as chairman and ceo. The division consisted of a group of companies, including the Avis and Budget rental car groups.

[A related story is here.]