Not only people ‘flock’ to Princess Cruises 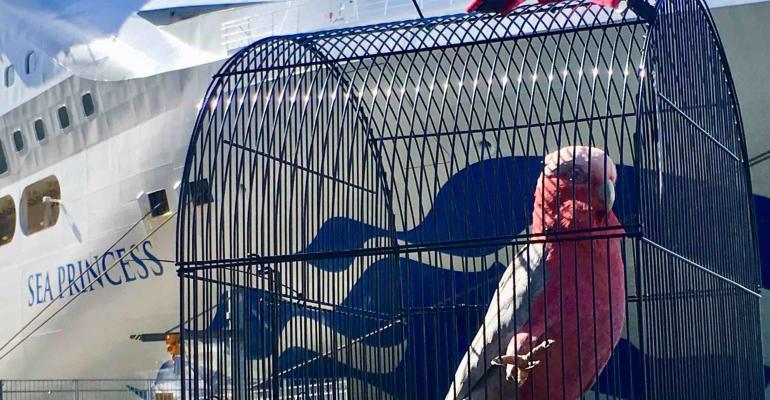 Harri with her ship, Sea Princess
People around Australia and the world have been captivated by the adventures of Harri, a rose-breasted female cockatoo.

Harri’s owners, Michelle and Brett Cozzi and their 4-year-old daughter Georgia, were packing for a cruise aboard P&O Cruises Australia’s Pacific Aria at their home in Nundah, Queensland, when Harri’s cage was accidentally left open and the bird flew the coop.

Incredibly, Harri had decided to take a cruise vacation of her own and landed on Princess Cruises Australia’s Sea Princess, which was sailing to New Zealand.

When crew members came across Harri, they scanned the bird for a microchip and discovered she was a family pet. They made Harri an honorary crew member with her own laminated crew identification card and put her up in a stateroom where she enjoyed Princess Cruises' world-class service and daily meals.

‘The entire ship’s company had come to love Harri and she was a very good shipmate, but we could see she was missing her human family,' Romano said. ‘It was a great pleasure to be able to reunite them.’

Back on land, the Cozzi family were waiting at Brisbane’s Portside Cruise Terminal to pick up Harri when Sea Princess docked.

‘We are very excited to have Harri home because she is a much-loved and indispensable part of our family,’ Michelle Cozzi said. ‘We had hoped for her safe return but after Harri had been gone for a few days, it wasn’t looking good. It was amazing to discover she had been found on another cruise ship. It was just the best news possible.’

‘We are pleased to contribute to such a positive outcome in a story that has captured the imagination of so many people here and around the world,’ Princess Cruises svp Asia Pacific Stuart Allison said.

Allison credited Harri’s safe return to the joint effort by Princess Cruises, the Sea Princess crew and government authorities on both sides of the Tasman Sea.