Novel idea from Silversea: An expedition world cruise in 2021 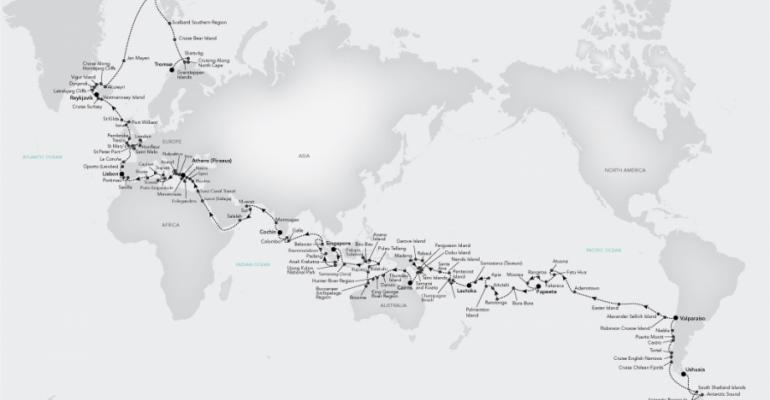 This chart shows the 167-day expedition world cruise from Ushuaia, Argentina, to Tromsø, Norway (click to enlarge)
Silversea Cruises is offering two world voyages in 2021, and one of them is an expedition cruise.

A pre-sale opened today to world cruisers of 2019 and 2020. Sales for both the 2021 journeys will open to the public this March.

It's a novel idea, but not the first expedition world cruise. Cruise West's Spirit of Oceanus set off on what was planned to be a 335-day expedition voyage in March 2010, however the company ceased operations in September that year.

The expedition voyage—dubbed the ‘uncharted world tour’—will sail from Ushuaia to Tromsø in 167 days. The 107 destinations in 30 countries include six new ports for Silversea: Naxos, Folegandros, Nafpaktos, Ksamil, Bejaïa and Fort William. The two-bedroom owner’s suite on Silver Cloud is priced just short of $1m for the full voyage.

Travelers will be able to engage with remote destinations through hands-on exploration; immersive shore excursions, which are included; lectures by Silversea’s expedition team and from world-class experts, including, among others, Felicity Aston MBE, a recipient of the Polar Medal and the first and only woman to cross Antarctica alone, and Tim Severin, a world-renowned explorer who has retraced the storied journeys of St. Brendan the Navigator, Sindbad the Sailor, Jason and the Argonauts, Ulysses, the first crusade and Genghis Khan.

Passengers will be treated to a private dinner on London Tower Bridge’s walkway, an exclusive Viking feast in Kjarnaskogur Forest in Iceland and a number of other bespoke events around the world. For a segment of this voyage, Silversea's Conrad Combrink, SVP expedition and destinations experiences, will serve as expedition leader.

Departing Ushuaia on Jan. 30, 2021, Silver Cloud will journey between Antarctica’s highlight destinations before setting course for Chile’s Valparaíso via the Chilean Fjords. The trip continues to Papeete, Tahiti, via Easter Island and Pitcairn Island, before voyaging toward Lautoka, Fiji. Calls at a number of other iconic destinations in Oceania—including remote exploration stops in Vanuatu, the Solomon Islands and Papua New Guinea—precede arrival in Cairns, Australia, which then leads to the Kimberley Coast.

Next come destinations in Indonesia, before arriving at Singapore. Next, Silver Cloud will sail for Sumatra, Sri Lanka and Cochin, India, prior to reaching Piraeus, Lisbon and Reykjavik. Exploration of Iceland's highlights follows, ahead of calls in the Svalbard region and the voyage’s conclusion at Tromsø, Norway, on July 16.

Silversea's 'finest world tour' is a 54-port, 150-day, 34-country journey aboard Silver Whisper beginning at Fort Lauderdale on Jan. 7 and concluding at New York on June 6.

Two new initiatives for this trip are Dine Around Town, offering the chance to indulge in a meal on Silversea at fine restaurants in the traveler's choice of two of four cities, with bespoke menus and wine pairings; and Your Day Your Way, which will enable travelers to travel deeper on their own or with friends, accompanied by English-speaking guides and transported in private sedans or minivans.

Also, world cruisers will be invited to a traditional masquerade ball in Venice and a glamorous night at the races in Hong Kong.

From Fort Lauderdale, Silver Whisper will transit the Panama Canal, head south to Callao (Lima), before visiting Easter Island and other highlights in the South Pacific and subsequently arriving at Auckland. From New Zealand, the world cruise will continue to Sydney, Brisbane, Cairns and Darwin, before reaching Benoa in Bali. Various stops throughout the Philippines, Taiwan and South Korea precede the ship’s arrival in Tokyo.

Free laundry service, medical service and a visa package for nationals of the US, Canada, UK, Germany and Australia are included, too.