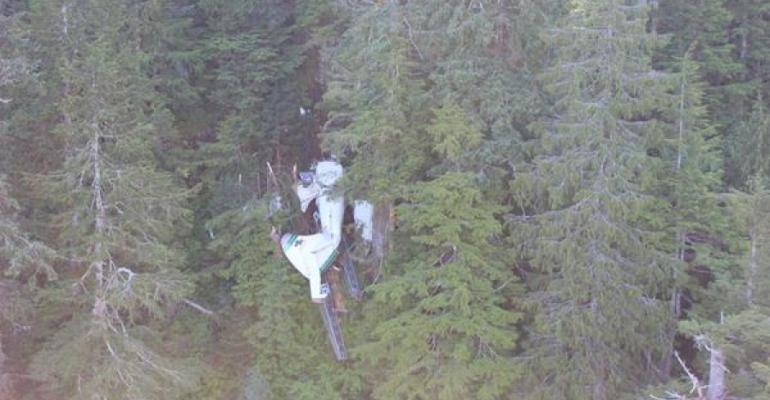 The flight-seeing plane hit the rock at about 1,600 feet, according to NTSB investigator Brice Banning (Photo: NTSB)

The floatplane that crashed near Alaska's Misty Fjords on Thursday, killing all nine people aboard, 'impacted a rock face at about the 1,600-foot level,' National Transportation Safety Board investigator Brice Banning said.

The plane then slid back about 35 feet. Banning described conditions at the scene as 'very difficult' The site is remote and hard to access, and the terrain is steep. Investigators are working with ropes.

Photos released by the NTSB show the wreck's precarious position.

The fuselage is intact but the wings broke apart, Banning told KTUU in Anchorage. He did not know whether the plane hit the wall at high or low speed.

Battling wind, rain and low clouds, rescue workers were able to remove the victims' remains Friday. The dead include eight cruise passengers on an excursion purchased through Holland America Line's Westerdam and the pilot.

The DeHavilland DHC-3 Otter single-engine aircraft is owned by Promech Air of Ketchikan.