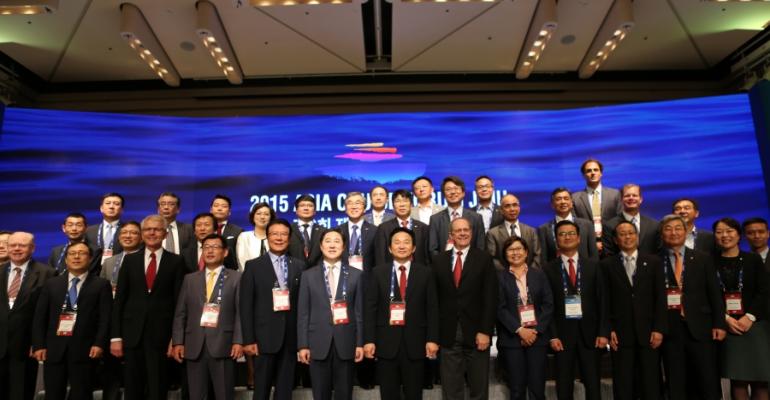 Participants at the opening ceremony of the 2015 Asia Cruise Forum, Jeju

The number of cruise ships in Asia has increased 10% in the last two years, rising from 43 in 2013 to 52 in 2015 whilst the number of cruises were up 11% with 861 in 2013 and 1,065 this year. These numbers were presented by Alan Buckelew, chairman of Carnival Asia and Group coo of Carnival Corporation & plc delivering the keynote address at the third annual Asia Cruise Forum, Jeju held at the end of last month.

Giving an insight into some new thinking and policy support for the cruise Industry in China was Wang Younong,  director general,  Wusongkou Shanghai International Cruise Terminal(WSICT).

He reported that the proactive Shanghai State Council is further facilitating investment into tourism and cruise. This includes support for the design, development and building of large-size cruise ships by domestic businesses. The Council has also authorized the development of a suitable number of coastal cruise terminals. The Yangtze River Delta will be developed with Shanghai as the center, said Wang.

In terms of the operational size WSICT already ranks the first in Asia and the eighth in the world, he said. In June this year further expansion began at WSICT and is expected to be completed in 2017, allowing four mega cruise ships to berth at the same time.

Wang said the terminal will then have the capacity to handle 800-1,000 ships calls per year. Also in the works are plans to integrate the Shanghai Free-Trade Zone with the local tourism and cruise sectors.

He identified the main challenge is related to integrating other parts of the industry value chain. Based on initial findings, the National Tourism Bureau' s recommendation is to develop the cruise industry chain as soon as it is practical. ‘The plan is also to foster the domestic cruise businesses in parallel to policies supporting international cruise ships, to boost cruise overall tourism,’ said Wang.

One of the measures is a pilot 72-hour transit and immigration visa waiver adopted at Chinese cruise terminals.

On the roster of ships that have used WSICT for Chinese homeport operations since 2012 are Royal Caribbean International’s Legend of the Sea, Voyager of the Sea, Mariner of the Sea, Quantum of the Seas, Costa Cruises’ Costa Atlantica, Costa Victoria and Costa Serena, Princess Sapphire. Celebrity Millenium, and SkySea Cruises’ Golden Era.