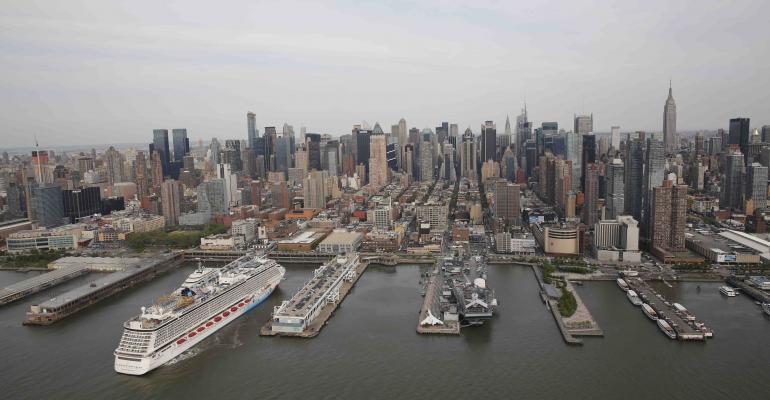 The New York City Economic Development Corp. has selected Ports America to operate both the Manhattan and Brooklyn cruise terminals through 2029. As part of the new agreement, Ports America has agreed to invest $38.5m in capital improvements at both terminals, strengthening New York City’s position as one of the country’s premiere cruise ports.

Ports America will be responsible for vessel berthing and stevedoring, maintenance, parking, security, billing and additional operations at both terminals. Ports America will also provide ancillary services such as event management and military and yacht dockings.

With the partnership of council member Corey Johnson and the entire City Council, the lease agreement with Ports America was approved this week for the Manhattan Cruise Terminal, the final approval needed for NYCEDC’s operator selection. Ports America has agreed to invest $23.5m in capital improvements at the terminal, which will include new capacity for larger vessels and improvements to Pier 90, among other investments.

Brooklyn Cruise Terminal will be receiving $15m in capital investments, conceived through a partnership with Brooklyn Borough president Eric L. Adams, which will include an increased capacity for larger vessels, among other improvements. Adams initiated this project with a $1.2m capital allocation in fiscal 2016, and supplemented the effort with an additional $1m grant in fiscal 2017.

NYCEDC said the designation of a single terminal operator will lower costs and streamline operations between the two terminals, which will create new opportunities to secure long-term agreements with cruise lines. Ports America has managed and operated the Manhattan Cruise Terminal in successful partnership with NYCEDC for two decades, generating substantial growth in cruise volumes.

'New York City’s rich maritime history must continue to inform and strengthen our current economy. Our partnership with Ports America marks continued progress in leveraging the city’s waterfront assets to create jobs, attract tourists and drive growth in an important industry,' NYCEDC president and ceo James Patchett said. He thanked the elected officials in Manhattan and Brooklyn for their leadership in securing a 'vibrant future for our two cruise terminals.'

'For more than two years, my administration has been intensely focused on the revitalization of the Brooklyn Cruise Terminal, and the working waterfront as a whole, envisioning a future where the port's infrastructure and services are able to attract and accommodate the high level of tourism traffic that our borough is excited to welcome,' Adams said.

The investments put Brooklyn a 'big step closer' to becoming a top-tier player in the global cruise industry, the borough president said. He called Ports America's $15m investment a game-changer for economic development in Red Hook and the entire waterfront, as well as the complementary impact it will have on businesses and cultural institutions across the borough.

'I am so proud to have worked with the International Longshoremen's Association and local stakeholders, as well as the leadership at NYCEDC, to make this a reality,' Adams added.

'The cruise industry is a major economic driver for New York City,' said council member Johnson, 'and I’m pleased that this new agreement will help us grow our position in this industry while directing more revenue to Hudson River Park.' He thanked NYCEDC for striking a competitive deal that brings additional resources to local communities.

'Ports America is energized about the future of the cruise industry in NYC under these new agreements,' said Steve Loevsky, vp-cruise, Ports America. 'We are also implementing strategies that will increase vessel calls and passenger volumes, while enhancing the overall guest experience, asset utilization and safety. Ports America looks forward to our continued partnership with NYCEDC and our cruise line partners to provide for world-class facilities and services at both the Manhattan and Brooklyn Cruise terminals.'

Presidents of International Longshoremen's Association locals also expressed their support for the new agreement, including Louis Pernice of Local 1814 (Brooklyn) and Ronald Misiti of Local 824 (Manhattan).

NYCEDC issued a request for proposals for a new operator for both terminals in 2015. Metro Cruise Services had previously operated the Brooklyn terminal for many years.

In 2016, more than a million passengers cruised through New York City and the industry accounts for hundreds of millions of dollars in annual economic impact. The business also generates more than 1,000 full-time jobs through the International Longshoremen’s Association, the Port Police and Guard Union, and employees in accommodation, retail and food and beverage sectors.