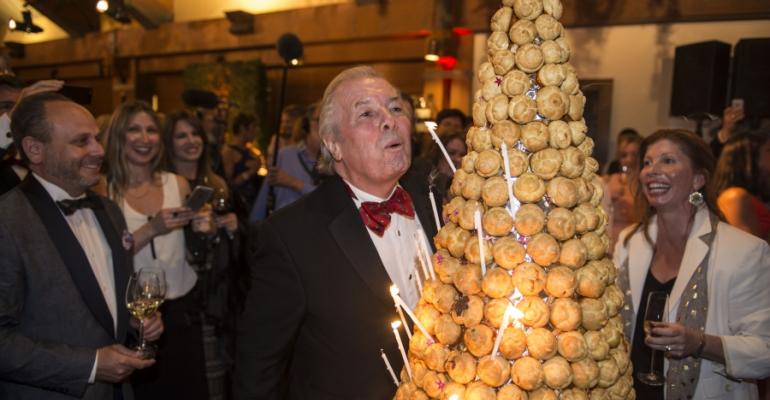 Legendary chef Jacques Pépin was honored on his 80th birthday with a gala event hosted by Oceania Cruises and 'Food & Wine' magazine during the Food & Wine Classic in Aspen. Pépin has served as the cruise line's executive culinary director since its start.

Attended by 500 of the country’s leading culinary influencers and enthusiasts, the gala took place on the spectacular Aspen Sundeck at the pinnacle of Aspen Mountain.

Oceania's Jason Montague, president and chief operating officer, delivered an address touching upon Pépin's many contributions to the cruise line. This was followed by a Champagne toast. The event hit a crescendo when a croquembouche cake, festooned with sparklers, was wheeled out, and Montague presented Pépin with a commemorative Champagne sabering sword.

July on board Oceania's Riviera promises to be a family affair as Pépin's daughter Claudine, co-host of the 'Cooking with Claudine' television series, and his granddaughter Shorey will join Pépin and his wife Gloria on the 10-day 'Iberian Inspiration' cruise. The ship sails July 7 from Lisbon for Civitavecchia (Rome).

Pépin's birthday festivities will continue in Marina and Riviera Culinary Centers throughout the year with the addition of 'La Technique: A Celebration of Jacques Pépin’s 80th Birthday.' The class will teach the chef's world-renowned cooking techniques.