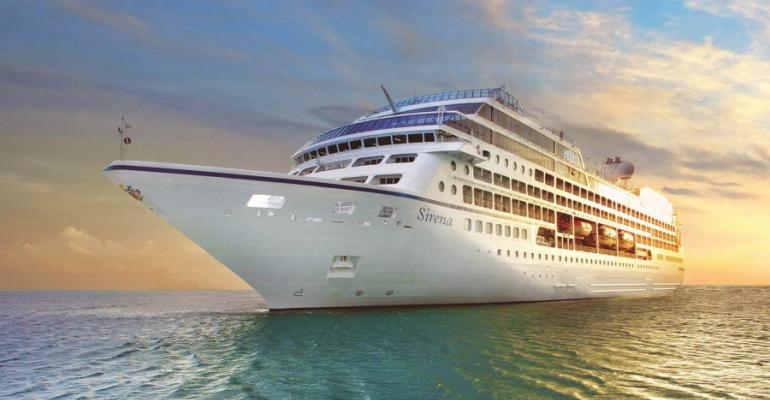 Sirena (currently operating as Ocean Princess) will enter service for Oceania Cruises on April 27, 2016, with a Barcelona to Venice voyage. Details of that sailing and the line's 2016 summer and fall program for its five other ships show 90 new itineraries and 20 new ports.

In the summer and fall season alone, the expanded fleet will call at 240 ports in more than 70 countries, including several overnight stays.

Following a $40m refurbishment, Sirena will join sister ships Insignia, Regatta and Nautica—all originally R-class vessels. Sirena will emerge in the same style as the other ships, with specialty restaurants Toscana and Polo Grill, along with more recent additions to the fleet such as Baristas and the cook-to-order grill Terrace Café.

With six ships, Oceania can cover more destinations. One new itinerary is a 17-night sailing aboard Marina from Buenos Aires to Valparaíso via the Chilean Fjords.

The line also introduced seven new 'grand voyages,' ranging from a 90-night round-trip from Miami to a 40-night Vancouver to Montréal sailing. The 90-night voyage will explore North America, the fjords of Greenland, locales in the Mediterranean and Africa, and include stops at ports like La Goulette (Tunisia) and Algiers (Algeria). The 40-night Vancouver-Montréal voyage will visit both coasts of North America including stops in Nicaragua, Costa Rica, Panama and Colombia and a Panama Canal transit.

Sirena’s 14-night Barcelona-Venice maiden voyage will be followed by a new lineup of 10- to 14-day cruises blended with a mix of classic and new destinations throughout the Mediterranean, including two voyages venturing as far west as Seville and Lisbon. The ship will visit 11 new locales for Oceania, such as the beaches of Gaeta, the rainforest of Golfito and the Mexican provincial township of La Paz.

Marina will focus on Scandinavia, the Baltic and the British Isles for a four-month period before repositioning to South America with a 16-night Lisbon to Rio de Janeiro sailing on Nov. 21. The ship will devote the remainder of the season to cruises visiting Brazil, Uruguay, Argentina and Chile.

Riviera begins the season in the Mediterranean on cruises that include overnights at Barcelona, Monte Carlo, Venice, Istanbul and Jerusalem (Haifa), and a new port for Oceania, the French village of Bandol. Then the ship repositions to the Caribbean with a 14-night Barcelona-Miami journey. The season will conclude with cruises to Central America and the Caribbean.

Regatta will sail Alaska in summer 2016 before repositioning to the Northeast with an 18-night voyage from San Francisco to New York, where the vessel will visit two new Québec ports, Havre-Saint-Pierre and Gaspé. The season wraps with a 23-night Amazon River cruise and a 16-voyage to Central America and Mexico.

Insignia's season begins with a 90-night round-trip from Miami exploring North America, northern Europe, the Mediterranean and Africa. Following this 'grand voyage,' the ship will sail south to destinations including Peru, Argentina and Uruguay. The season concludes with several Caribbean sailings and Oceania's first visit to Punta Cana.

Nautica's new itineraries span northern Europe, the Mediterranean and Asia, including overnights at Reykjavik (Iceland), Dubai (United Arab Emirates) and Mumbai (India). The ship will sail 18 voyages ranging from seven to 30 nights and call at new ports such as Vlissingen, Skagen and the Swedish naval city, Karlskrona, a UNESCO World Heritage Site. Nautica will conclude the season with a 15-night cruise along Africa’s southern coast with overnights at Durban (South Africa) and Walvis Bay (Namibia).