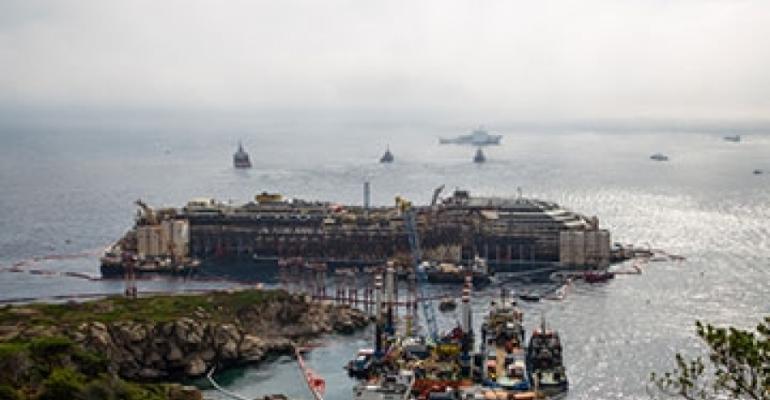 Refloating operations continue around the clock

Concordia's oil spill response team contained a small leak in the midship/aft area of the wreck late Saturday and refloating operations are continuing around the clock at Giglio. The wreck had emerged about 6.5 meters by Sunday afternoon.

Officials said that after 'a small amount of hydrocarbons' was spotted at about 11 p.m. Saturday, the oil spill response team cleaned the area using absorbent booms. There is currently no evidence of a leak, they added.

Franco Porcellacchia, Costa Crociere's project manager for the removal, said the amount was about 50 liters.

Technical assessments found no evidence of damage in the ship's structure, and the team is replacing the absorbant booms.

As refloating operations continue around the clock, six starboard sponsons are still to be lowered. Once this operation is completed, Decks 4 and 3 will emerge rapidly, according to The Parbuckling Project. That will be as high as the ship is raised before its departure under tow.

Italian news agency ANSA on Saturday posted a video of Concordia, shot from a boat.