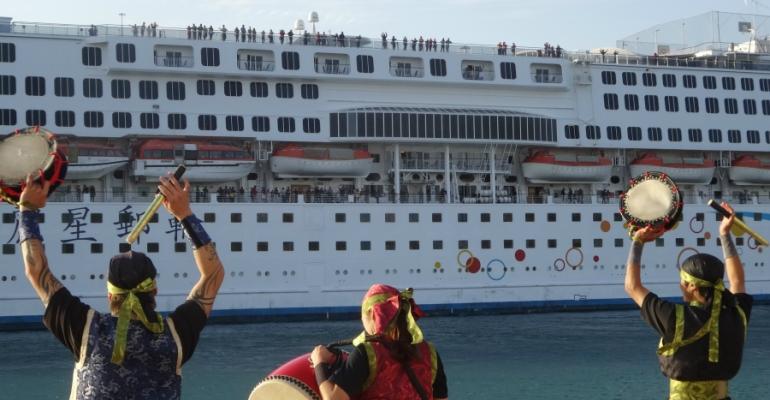 Okinawa Prefecture, consisting of 160 sub-tropical islands located in the Pacific Ocean south of mainland Japan, north east of Taiwan and 820 nautical miles east of Shanghai, is growing its cruise tourism as more and more ships are being deployed in Asian waters.

Calls are up again in 2015 with 186 ships booked Nana Murakami, overseas marketing coordinator of Okinawa Convention & Visitors Bureau told Seatrade Insider during a visit to the UK as part of a wider European tour to meet cruise line itinerary and shorex planners.

Swan Hellenic’s Minerva, Fred Olsen’s Balmoral and RCI’s Quantum of the Seas (five times) will be maiden callers this year and the islands are gearing up to welcome Cunard’s Queen Elizabeth – the first ship from Cunard during her 2016 World Voyage.

Star Cruises is Naha’s most frequent customer with ships visiting three times a week between April and October. The 340mtr long berth and newly opened cruise terminal is 20 minutes by foot away from the city centre with its 1,600mtr long Kokusai Street lined with shops and restaurants.

Nearby is Shurijo Castle, built in the 13 and 14th century and rebuilt in 1992. It is one of nine castles in Okinawa to feature on UNESCO’s World Heritage list.

The history of Okinawa dates back to the Ryuku Kingdom between 1429-1879 when the islands prospered as a transit point in the trade with Japan, China, Korea and southeast Asia. Fast forward to the last century and between 1945-1972, the islands were under the administrative control of the US. The American military’s presence in Okinawa is still visible today.

The waters around Okinawa are home to sandy beaches, coral reefs and diving and snorkelling, as well as whale watching, are popular activities with cruise visitors remarks Murakami.

Ishigaki island is packed with villages featuring houses with red tile roofs, subtropical jungle, ceramic workshops and cavernous limestone caves. From Ishigaki port it is possible to reach several remote islands by ferry (journey times range from 15 to 90 minutes) where passengers can immerse themselves in a diverse ecosystem with relaxed tours on coral-paved roads in a water buffalo cart, or kayak through Japan’s largest mangrove forest, enjoy a treasure trove of 4,000 tropical plants or sunbathe on pure white sandy beaches.