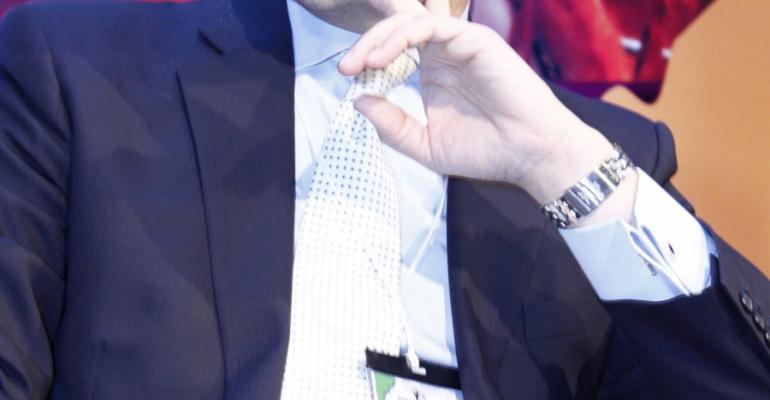 Three deaths were reported after the vessel—now lying on its starboard side with a large gash in the hull bottom—was evacuated late Friday near the Tuscan island of Giglio. Costa has not confirmed the number of fatalities or injuries, but news reports said two French passengers and a Peruvian crewman had died.

‘I want to express our deep sorrow for this terrible tragedy,’ Onorato said in a statement on Saturday afternoon, adding that he was able to speak only then because he has been at Isola del Giglio to be close to the rescue operations.

‘Captain Schettino, who was on the bridge at the time, immediately understood the severity of the situation and performed a maneuver intended to protect both guests and crew, and initiated security procedures to prepare for an eventual ship evacuation,’ Onorato said.

‘Unfortunately, that operation was complicated by a sudden tilting of the ship that made disembarkation difficult,’ he continued.

The BBC said Schettino was being held by authorities for questioning.

Costa earlier said 3,200 passengers and approximately 1,000 crew had been evacuated late Friday. Some went off in lifeboats, but news reports said a few people had jumped into the water and swam to shore, while many were plucked from the vessel by helicopters. Divers on Saturday were searching for bodies and anyone who might have been trapped on board.

Update: Late Saturday a South Korean couple was reportedly found in their cabin by rescuers and brought to land in good condition.

The BBC, citing a local official, said about 40 people may be missing, although some of those could be safely on shore. About 40 people are being treated in hospital, the BBC reports.

Onorato expressed Costa’s appreciation to ‘all the authorities, law enforcement and volunteers who provided assistance to our guests and crew involved in this terrible event.’ Rescue operations coordinated by Italy’s coast guard are continuing.

‘From the moment we were alerted, Costa mobilized all its resources ashore to assist our guests and crew members, and to prevent potential environmental impacts,’ Onorato added.

Carnival Corp. & plc in a statement expressed ‘our sympathies and heartfelt condolences to all of the Costa Concordia guests, crew members and their families’ and said it is committing ‘our full resources to provide assistance and ensure that all guests and crew are looked after.’

The parent company of Costa further expressed ‘deep gratitude to the Italian Coast Guard and local authorities and community members who have gone to extraordinary lengths to assist in the evacuation of the ship and provide support for our guests and crew.’

Costa Concordia had sailed Friday evening from Civitavecchia on a scheduled itinerary to Savona.