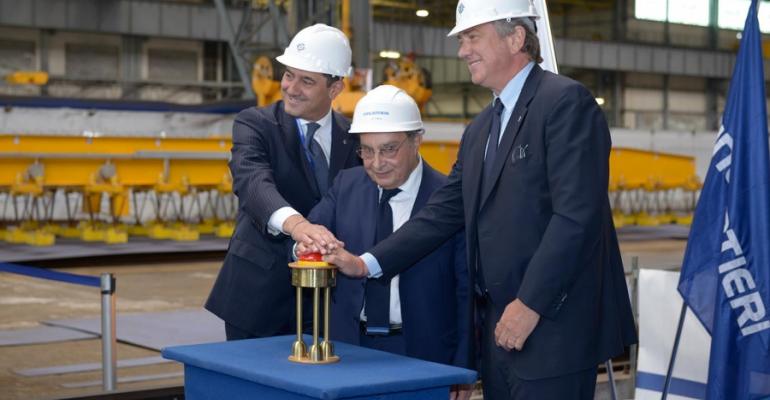 This is MSC's first newbuild at Fincantieri—all its other vessels were built in France. Plus, MSC Seaside has a novel design and is significant to the European company's thrust into the North American market since the ship will operate in the Caribbean year-round from PortMiami.

'We have reinforced our commitment to North America,' Onorato told Seatrade Cruise News. Not only is the ship tailored for the market, but MSC is boosting consumer advertising and trade support stateside.

MSC Seaside will have nine eateries, 20 bars, family accommodations, a full-size bowling alley and a comedy club in addition to the earlier announced enormous interactive water park on top and an adventure trail/ropes course.

On the same day steel was cut for MSC Seaside, the company shared further details about the French-built MSC Meraviglia and opened sales for that ship to MSC Club members. The first booking came from a Japanese customer, who reserved MSC Yacht Club accommodations for a June 2017 cruise.

'That's fantastic,' a delighted Onorato said, because it demonstrates MSC's global appeal. 'It's an expression of our strength and shows what MSC wants to be—a global cruise line that operates in multiple markets.'

That said, MSC 'will keep our Italian roots,' he added.

Both MSC Meraviglia and MSC Seaside have modular cabins for families that can be configured in different combinations sleeping up to 10 people.

Both ships will have near field communication technology so cruisers can open their cabin doors and their safe, access certain shipboard areas, make bookings and purchases, locate their children and more, using a wristband or their smartphone.

A special MSC Meraviglia feature will be a dramatic aft lounge—more details to come—and a 'beautiful LED dome' over an interior promenade and sets the tone for an 'elegant, sophisticated, Mediterranean-style' avenue reminiscent of Rome's Via Condotti, in Onorato's words.

MSC Meraviglia will cruise from Genoa, Marseille and Barcelona starting in May 2017, with Barcelona expected to be the gateway for Americans.

MSC Seaside, which will debut in Miami in November 2017, fresh from the shipyard, has among its nine restaurants four themed eateries—an Italian-style fish venue, a North American steak house, a fusion experience and a teppanyaki spot.

'We want to be very authentic,' Onorato stressed. 'The teppanyaki will be prepared by Japanese chefs and the steak house will be in perfect US style,' he said.

There will even be a restaurant just for kids, with a small, child-sized entrance.

Onorato is pleased with the way things are shaping up in the Caribbean and the North American business driven by evp sales Ken Muskat. Leading up to MSC Seaside's arrival, MSC Divina will be in the Caribbean year-round in 2016.

Onorato underscored the importance of MSC's recently launched US television advertising—the first time the line is running a long-term national television branding campaign in the market—as a way to raise awareness and support the travel agent network. Besides making MSC more visible stateside, the company is investing in tools to help agents sell.

Key to that is the all-new MSC Book online booking engine, which goes live June 30.

Onorato added that North American bookings for the coming winter are 'quite satisfactory. We are quite happy.' Some Caribbean departures are strongly supported by European business 'but that is part of our strategy,' he said.

Meanwhile, sales open this week for 2016 Europe, featuring some itineraries expected to be particularly appealing for North Americans such as MSC Fantasia and MSC Preziosa cruises from Civitavecchia (Rome) and Barcelona.

Onorato singled out seven ports in seven days as a key differentiator of MSC's Mediterranean program.

While the company puts North America among its priorities, MSC makes up just a 1% sliver of the region's cruise business. Onorato said the goal is not to become a major Caribbean presence but to be a diversified global operator.