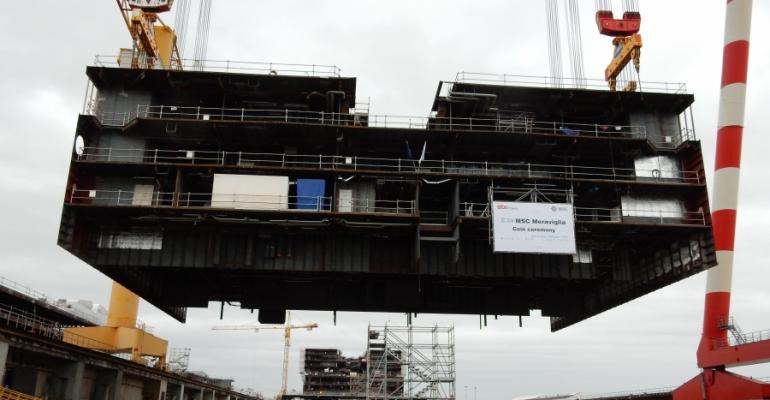 MSC Meraviglia's construction underway at STX France due for delivery in 2017
In a week when MSC Cruises unveiled plans to accelerate its fleet expansion programme, Seatrade Cruise News talked to ceo Gianni Onorato about the lines' strategy for the next five years.

According to the plans, MSC Cruises expected to reach 1,720,000 passenger capacity in 2016 with the completion of its four ship Renaissance program,

'Thanks to the early exercise option of the STX France-built ships, we are now working on fleet expansion which will see the last of seven ships, including the two Meraviglia-, two Meraviglia-Plus and three Seaside-class ships, enter into service in 2021,' Onorato told SCN on the sidelines of the coin ceremony.

The new delivery plan for the seven ships is now centred on a schedule which sees the Meraviglia’s first-of-class to be handed over by STX France in late May 2017 for a naming ceremony on June 1 in Le Havre followed by an inaugural Mediterranean season sailing out of main homeport Genoa, with interporting activities in Marseille and Barcelona.

The MSC boss also gave details on the delivery of the three Fincantieri-built Seaside ships. The first-of-class will be delivered in November 2017and named

in Miami. The second-of-class is planned to be handed over by Fincantieri in May 2018, while the last ship is to follow in May 2021, completing the fleet expansion program.

'The new delivery plan is expected to introduce a first substantial embarked passengers increment at the end of 2018, when the Meraviglia first-of-class would be 18 months in service, together with the Seaside first-of-class since around 12 months and the second-class ship since the May month of the same year,' said Onorato.

The overall program to double the company’s carrying capability will see a further push of around 1,160 passengers, as the Meraviglia-Plus ships carries around 580 guests each compared to the MSC Meraviglia-class ships.

'In addition we plan to increase staffing levels  by 36,000 (with 15% turnover) inside five years from now, including both new crew and shore-based personnel,' added Onorato.