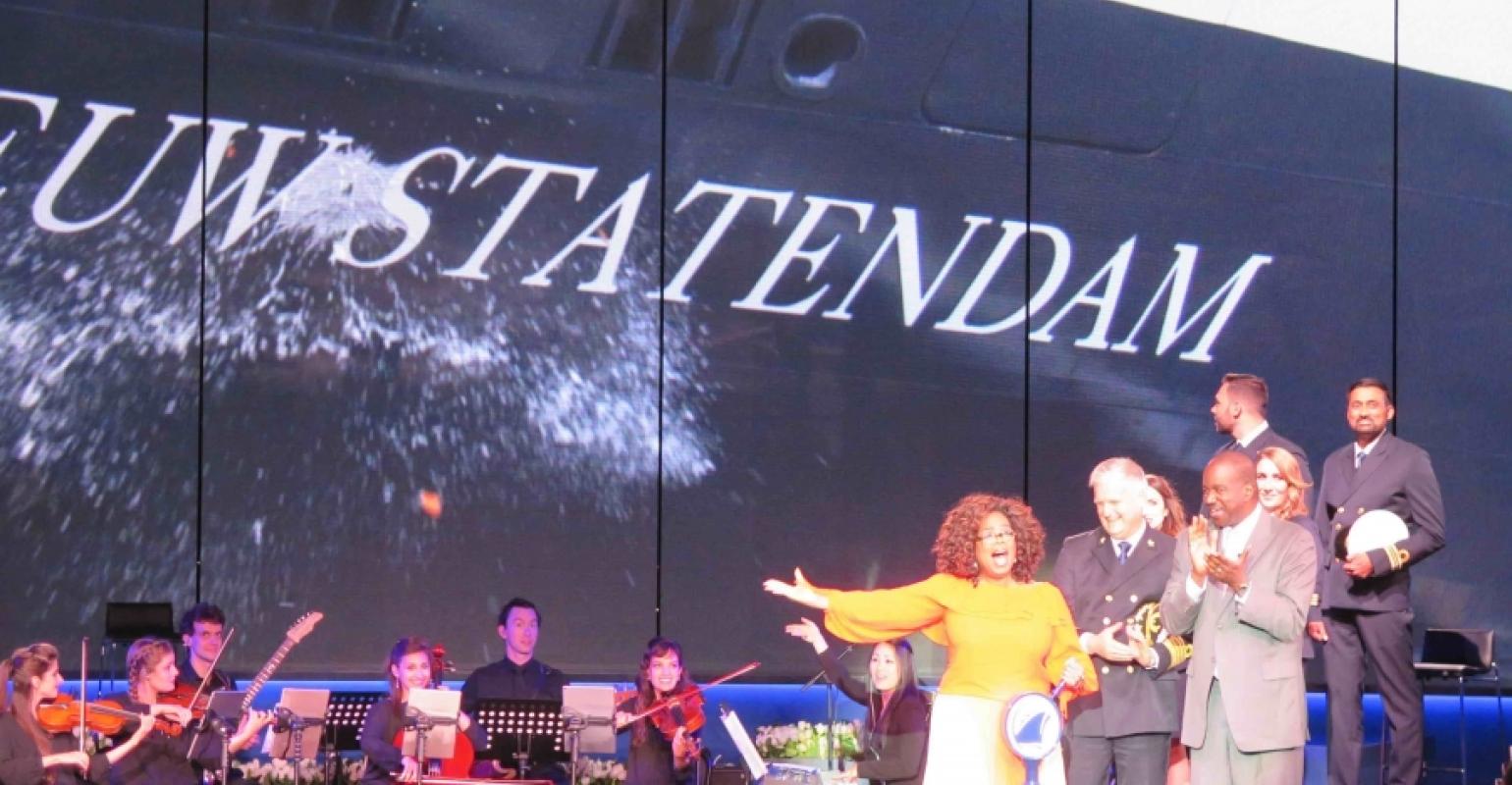 After the champagne bottle smashed, a gleeful Winfrey proclaimed: 'I'm the godmother!'

The ceremony highlighted unity and the transformative power of travel.

President Orlando Ashford noted: 'It is human nature to want to connect and understand each other ... Nieuw Statendam represents our highest aspirations for connection and understanding in our world.'

Capt. Sybe de Boer, a native of the Netherlands, recounted the 'expertise, passion and skill' that it took to realize a ship like Nieuw Statendam. De Boer spoke of his excitement at first seeing her. 'She was spectacular and huge—but still midsize,' he quickly added.

Environmental officer Diana Mihalache, a native of Romania, talked about working among a crew of 45 nationalities with 25 languages. 'This diversity is the very soul of Nieuw Statendam,' she said. Everyone is united for a common goal. 'We are one crew, one family, with one mission: to show you the world.'

Dining host Dee Dewi was born in Bali and thought she would spend her life taking care of the family farm. But after tragedy struck nine years ago, a friend suggested she apply to work at Holland America Line. Since then, she's been able to send her brother and sister to school and bought a house for her parents, all before turning 30. 'I'm very proud of it. I even met my fiance—he's from Canada—the first day he came on board.'

Drew Daly, general manager of Dream Vacations, recalled how a trip to Alaska, a reward for being the top Alaska seller the first year he became a travel agent, changed his life. Wowed by Alaska, he went from just selling travel to trying to create 'close, personal and connected' experiences for clients.

Before performing her naming duties, Winfrey told the crowd in the ship's World Stage: 'I've had the most blessed life of anyone I know ... I've never seen anything like these past three days.' She marveled at the diversity of ages (6 to 93) and experiences of the 2,000 women (and 57 men) on the 'O, The Oprah Magazine' cruise and how they all came together in a spirit of self-improvement.

'One of the best things I've ever done'

Winfrey said she'd been doubtful about taking the cruise but 'it turned out to be one of the best things I've ever done. Thank you very much.'

Nieuw Statendam is the sixth ship in Holland America Line's long history to carry the Statendam name. The first was launched 25 years after the company's founding, the second served as a troop carrier during World War II and the fourth was the first ship to operate a world cruise for HAL.