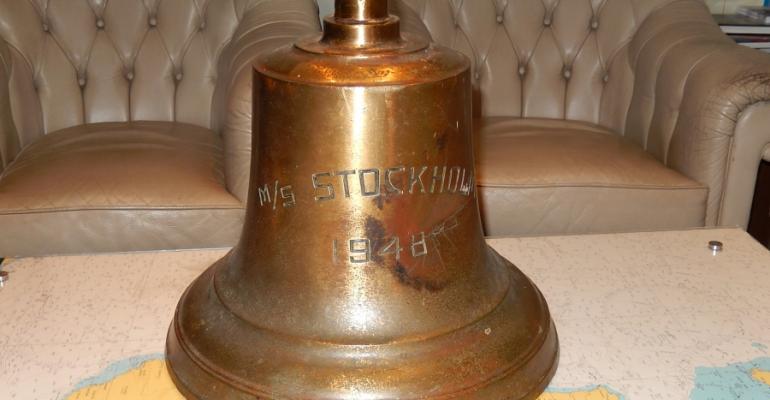 Cruise and Maritime Voyages received an unexpected piece of hard wear this week – the original ships bell from one of their fleet vessels.

Rosalea Ryan, a regular passenger on board Azores and a writer, has donated the bell on loan whilst the vessel continues to operate. It is then expected to join other original memorabilia in the Maritime Museum in Gothenburg.

The Azores started life as Stockholm in 1946 and gained notoriety in 1956, when in heavy fog the ship collided with the Italian Line ship Andrea Doria in the North Atlantic. Both ships sustained damage with the Stockholm bow badly smashed. Despite the damage Stockholm managed to carry off and save 327 passengers and 245 crew members before the Andria Doria capsized and sank.

It was during this incident that Stockholm lost its ship’s bell which was originally installed on board in 1947. The bell became tangled in the wreckage of Andrea Donia sinking with it.

Subsequently, a diver looking for artifacts from the wreck found it. Later it was traded for boat parts in the US. More recently it was offered for sale and Ryan bought it before offering it to the safe custody of Cruise & Maritime Voyages to display on board.