Ovation of the Seas expected to shake up cruising Down Under 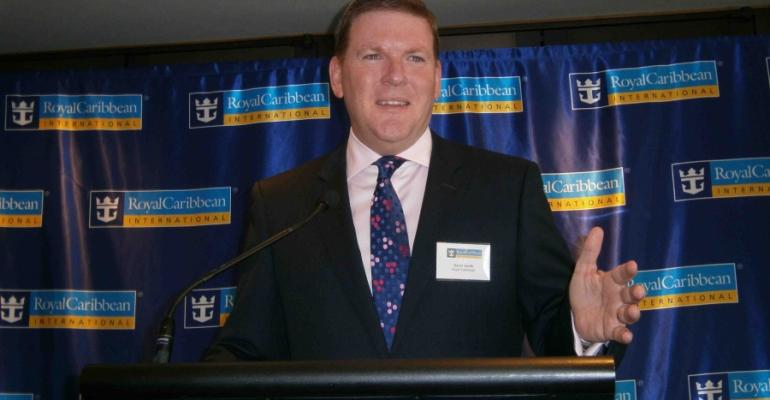 Gavin Smith announces Ovation of the Seas is coming to Sydney

Australia will be getting a taste of Quantum-class cruising when Royal Caribbean International deploys Ovation of the Seas Down Under following its inaugural China season.

When the 168,600gt ship homeports in Sydney during the 2016/17 austral summer it will become the largest cruise vessel to ever call Australia home.

'Royal Caribbean has been breaking the boundaries in Australian cruising since we arrived in 2007 but today, we have completely changed the face of the cruise industry, making the single largest investment in Australia by any cruise line,' Gavin Smith, regional vp Royal Caribbean, Asia Pacific, said in a sweeping statement.

He added: 'Ovation of the Seas will completely redefine the idea of cruising in Australia, taking the industry to the next level by offering a host of incredible never-before-seen features and technologies. This demonstrates our belief in, and long term commitment to, the Australian cruising market.'

The ship will sail five different itineraries to destinations around Australia and New Zealand, and will be based annually in Sydney during the southern summer. Ovation's first season will go on sale at the end of May.

Smith made the point that Chinese passengers demand the world's best products so Royal Caribbean is deploying brand new ships in China to cater to that market. He said Australia's southern summer proximity to China enables a short repositioning between Asia and Australia.

Royal Caribbean noted that Ovation of the Seas' North Star viewing capsule will reach higher than the pylons of Sydney Harbour Bridge.

And the company confirmed a 'Jamie's Italian' will be on board as the third such restaurant with Royal Caribbean after Quantum of the Seas and Anthem of the Seas.

Oliver said the response to the 'Jamie's Italian' on Quantum has been 'brilliant' and he's 'super excited' Ovation will be sailing out of Australia.

Additional details will be revealed at the end of April.