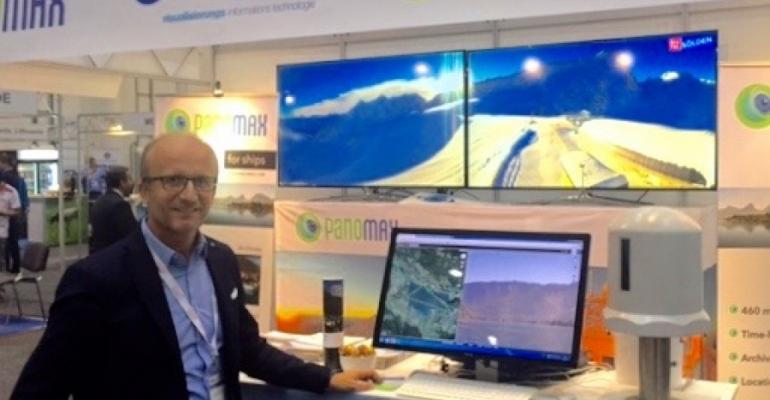 Hapag-Lloyd Cruises' Europa is set to become the first cruise ship fitted with Panomax, a 360-degree panorama camera that provides high-resolution images in up to 470 megapixels.

The images are loaded onto a central server and made available online at www.panomax.com. Similar to a live, interactive version of Google Street View, it provides a map, hot spots, location search, time lapse videos and other functions. Users can zoom in on any picture and order poster prints via an integrated print shop. Cruise lines with a Panomax camera will get a commission for every poster print sold online.

Legal compliance is ensured by a tool that recognizes faces and renders them indistinguishable before the photos are made available publicly.

Klaus Mairinger, founder and ceo of the Austrian company visit, trading under the Panomax brand name, is exhibiting the product range he personally developed at Seatrade Europe in Hamburg this week.

When Europa goes in for an overhaul in early October, Mairinger will determine the best location to install the Panomax camera.

The high-end, 470-megapixel variant for Europa costs about €50,000 plus €980 per month to operate. Less expensive models are available.

Mairinger recommends a high-resolution camera for cruise ships to allow passengers to zoom in and get excellent pictures of the coast even if the ship is some distance out. The client can choose the frequency for taking pictures, from between one minute and five or 10 minutes. The shipboard system stores pictures in an on-board server before uploading them to the online system in the next port of call.

An engineer who lives near Salzburg, Mairinger has come a long way with his Panomax cameras before making them available to the cruise industry. He invented Panomax for shore-based tourist destinations and particularly for operators of mountain cable cars and ski resorts. More than 250 cameras are in service, including in demanding climes like the Alps and on the German North Sea island of Langeoog where the system has proven resistant to a saltwater environment.

A year ago the first ship test run was conducted aboard Salzburg, an Austrian inland excursion vessel operating on Wolfgang Lake.

Mairinger has been approached by river ship operators to film individual cruises with a temporarily fitted Panomax cam. He is considering offering a service like this in the future.