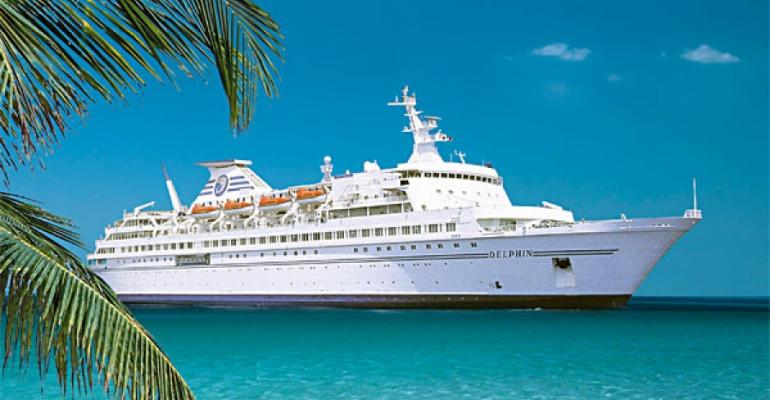 Passat Kreuzfahrten canceled the 2015 season for its 470-passenger Delphin. The ship completed its 2014 program in Bremerhaven Tuesday and will not return to the market under Passat's banner until further notice. The 2014/15 winter season had been canceled earlier, along with departures between now and Oct. 18.

Passat Kreuzfahrten aspires to bring Delphin back to the German market in the medium term and aims to resume operations in autumn 2015 after a restructuring.

For the time being, this is the end for one-ship-operator Passat Kreuzfahrten on the German market.

In early June the company had announced the cancellation of its 2014/15 winter season cruises and the September-October voyages. A prospective Delphin charter on the international market was cited as reason, but no details were disclosed. Now the same reason has been given for dropping the 2015 summer season.

Passat Kreuzfahrten said travel agent commissions will be protected for the canceled voyages.

Despite Passat's stated intention to resume operations, it remains to be seen if the 1975-built Delphin will ever return to the German market. It had sailed for a lengthy period for Delphin Kreuzfahrten, which collapsed in 2010. A lay-up in Venice followed before Indian investor Pradeep Agrawal acquired the ship through Vishal Cruises Pvt. Ltd and brought it back to the market via charter to the newly established Passat.

Before that, Delphin underwent an extensive refit in Croatia. Although well-kept, the 157-meter vessel is small by today's standards, having no more than 130 outside and 107 inside cabins.

Yet there may still be a market for it. Industry sources told Seatrade Insider there are not only charter interests, but also parties interested in acquiring Delphin from Vishal Cruises.