Peace Boat wants its fuel-efficient Ecoship to sail in 2020 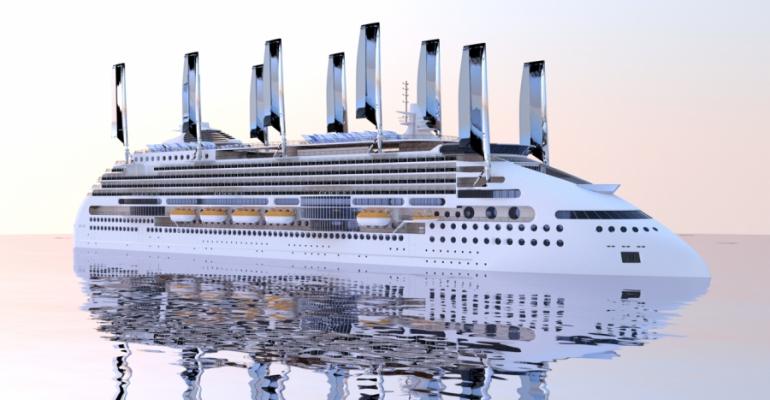 Wind power generators, photovoltaic cells, water recycling and a garden using organic waste fertilizer feature in the 'Ecoship' design proposed by Peace Boat. It's purported to reduce carbon dioxide emissions by 40% per passenger day compared to cruise vessels built in 2000. Ships, of course, have made big efficiency strides since then.

The Ecoship looks dramatic, with 10 retractable sail masts, a curved-down bow and a hydrodynamically optimized hull form modeled on a whale. The hybrid propulsion design is adapatable to future fuels like LNG and would have 'radical energy efficiency,' Yoshioko Tatsuya, director and founder of Peace Boat, said at a news conference Saturday during the United Nations climate summit in Paris (COP21).

The Ecoship would require 20% less propulsion energy and have a 50% lower energy load per passenger day, also presumably in comparison with a 2000-built vessel, according to the presentation.

Seatrade Cruise News notes that 'conventional' cruise ships have made vast energy efficiency advances in the past 15 years. Sail-assisted cruise vessels have operated for much longer than that and, in recent years, some ships have used solar power to supplement energy needs, however their contribution is still very minor due to current technology.

Large LNG-powered cruise ships are already under contract by Carnival Corp. & plc for its Costa and AIDA brands.

The Ecoship's wind generators and photovoltaic cells cannot cover its propulsion needs but they have a 'symbolic meaning,' Tatsuya said during the COP21 news briefing.

'If we can build such a ship, it would make a huge impact globally,' he predicted. Sailing the world, it would get attention in places like Manhattan, Tatsuya said. The EcoShip's greatest potential, according to a Peace Boat release, would be to 'raise awareness and effect change across the industry as a whole.'

The Japan-based Peace Boat has been running educational voyages focused on peace and sustainability aboard chartered ships since 1983 and has Special Consultative Status with the Economic and Social Council of the United Nations.

Now the NGO said it's ready to build its own vessel, and announced a maiden voyage in 2020. But there's no date or specifics.

At COP21 Tatsuya lacked the time in the constraints of a 20-minute news conference to share technology details, and he did not mention any building contract.

His Ecoship presentation welcomed parties to 'get on board with us as a donor or an investor.'