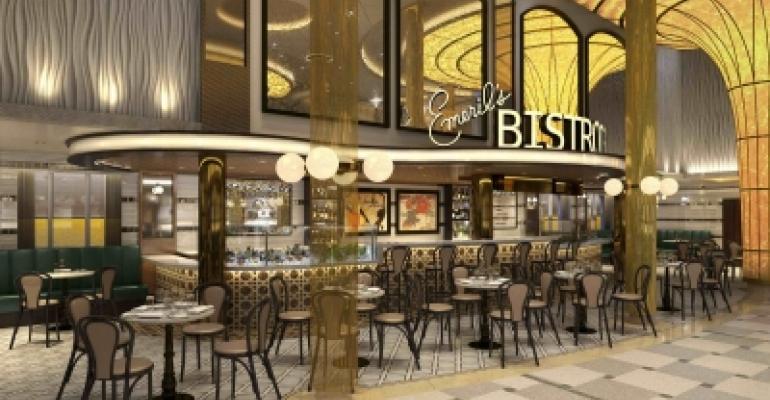 Emeril’s Bistro 1396 will be located in the heart of the ship's French Quarter zone and serve signature dishes like barbecue shrimp, roasted duck and Andouille sausage gumbo and jambalaya

Located in the heart of the ship's French Quarter zone, Emeril’s Bistro 1396 will showcase the signature dishes that earned Lagasse the reputation as one of New Orleans’ most acclaimed and respected chefs.

'He's so on brand for us,' Carnival president Christine Duffy told Seatrade Cruise News. 'He's approachable, down-to-earth. He loves food.' Duffy noted that Lagasse had 'discovered' another star chef and Carnival partner, Guy Fieri, by introducing him at the South Beach Food & Wine Festival years ago. 'It's nice chemistry between our chef partners,' she said.

'An opportunity I could not pass up'

'I’ve developed restaurants all over the country, but to create my first restaurant at sea—on a ship named Mardi Gras with its own French Quarter, no less—was an opportunity I simply could not pass up,' Lagasse said.

'These are Emeril's recipes and he's working with our culinary team to ensure they're very authentic,' Duffy said. 'Carnival guests are going to love the menu.'

Appetizers will be priced starting at $2, with signature dishes costing up to $12, a tremendous value compared to Lagasse's land-based restaurants.

Emeril’s Bistro 1396 will take center stage in Mardi Gras’ French Quarter, one of the ship’s six themed zones. The French Quarter aims to capture the festive spirit of New Orleans with food, cocktails and live jazz.

The 60-seat venue will be in the heart of the action, open to the promenade (similar to the Bonsai Sushi venue on current ships).

'We're going to get [Lagasse} and his family on the ship,' Duffy said. 'This is just the start of a great relationship,' she added. 'We have lots of ideas beyond Mardi Gras. We've got ships in New Orleans.'

Mardi Gras is set to enter service in Europe Aug. 31, 2020, before repositioning to New York for a series of voyages then shift to Port Canaveral's custom-built Cruise Terminal 3 for year-round seven-day Caribbean cruises beginning in October 2020.