Pimentel: ‘Entirely possible’ that Australasia will be No. 2 market for Azamara 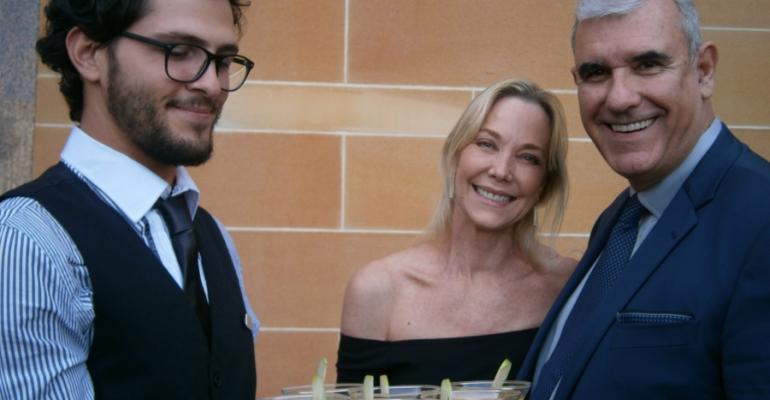 Larry Pimentel and his wife, Sandi, at Monday's AzAmazing evening at the Museum of Contemporary Art in Sydney

Speaking to Seatrade Insider in Sydney today, Larry Pimentel, president and ceo of Azamara Club Cruises said it is ‘entirely possible’ that Australasia will surpass the UK as the company’s No. 2 source market after the United States.

A year ago Pimentel said Australasia would probably represent between 15 to 18% of business in 2015.

He said Australasia will now account for 24% of Azamara’s entire revenue this year.

He said bookings from Australia and New Zealand for Azamara Quest which arrives in Darwin on December 28 this year on the company’s first visit to Australia were so aggressive it has been decided to send Azamara Journey to the region in 2017. He said Azamara Quest will return in 2018.

She will then make the return voyage from Auckland to Sydney.

Pimentel, who arrived in Sydney last Friday, will go to Melbourne later this week to be a keynote speaker at Cruiseco 2015.

He will meet up with Azamara’s destination guru, Austrian Claudius Docekal, who has arrived in Melbourne to plan AzAmazing evenings for the 2017/18 voyages. Pimentel said Docekal will also be looking at other ports, including Darwin, Sydney and Auckland.

Pimentel attributes Australasia’s growth to almost a quarter of Azamara’s business to ‘the way people in this part of the world’ travel.

He said they are a perfect fit for the company’s new advertising campaign -- 'the voyage for those who love to travel' -- that was launched in America recently.

He said that while Americans take shorter cruises, Australians are on board Azamara ships much longer -- on average around 13 to 14 nights.

‘They don’t like the product, they love it,’ he said, especially longer port stays, more overnights, night touring and the all-inclusiveness of the product.

He said Azamara Club Cruises is profitable and gives Royal Caribbean a unique product to sell in a competitive marketplace.  It is his hope that the board of directors gives a 'thumbs up' for another ship.