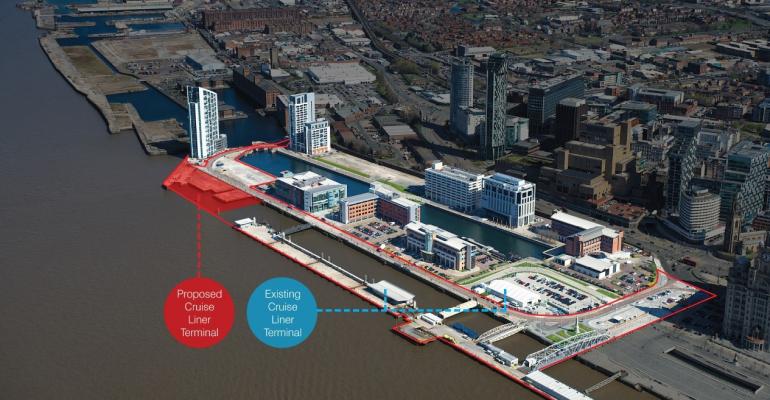 The permissions awarded by the city’s Planning Committee mark a significant milestone in the long-awaited project.

Liverpool aired its aspirations to build a new cruise terminal, capable of handling turnarounds for more than 3,000 guests, as long ago as 2015.

In the meantime, a team of architects and engineers has been examining options to develop the new terminal alongside the existing floating berth which has been in service for 11 years.

The city has successfully established itself as a multi-award-winning day call location, owing much of its success and popularity with cruise lines and their guests to the terminal’s proximity to Liverpool’s famous UNESCO World Heritage Site waterfront and a host of other visitor attractions. Turnaround business has also been developed and is seen as key to the business model adopted for the new development.

In February, Liverpool City Council announced the appointment of leading UK building and civil engineering contractor McLaughlin & Harvey to undertake the initial phase of a two-stage design and build contract.

First work on site will be the removal of remaining timber structures which formed part of Liverpool’s historic former Princes Landing Stage, used to handle a range of passenger vessels until the late 1960s.

Head of City Assets, Angie Redhead, told Seatrade Cruise News: ‘This is a major step forward for the project which is one of the city’s most important regeneration schemes.'

Redhead, the Seatrade Cruise Port Personality of the Year 2017, added: ‘We’ve seen the benefits of the existing cruise terminal, which brings in around £8m each year to the local economy. This figure will increase significantly when we can welcome the next generation of super liners all year round.

‘This has the potential to create thousands of new jobs will see thousands more visitors heading to the city, and we look forward to working with the team of experts to bring to life these exciting and transformational plans.’

No date has been made public for the opening of the proposed new cruise facility.